Kudos to Malaika for sending out a great message of body positivity. No amount of trolling can come in the way of a woman's strength and confidence.

Actor Malaika Arora is all fit and fabulous. Her amazing physique at the age of 47 is often a topic of discussion among fitness enthusiasts, especially women. Malaika’s latest photos once again created a stir online but this time, she won the hearts for her confidence in flaunting the stretch marks. The actor was clicked by the paparazzi while leaving for her regular yoga session. She was snapped in Mumbai, dressed in a pink t-shirt, teamed up with yoga pants. Many people called her ‘old’ while there was a section of internet users who defended her and called the visible stretch marks ‘natural’.

One user commented, “Tummy se budapa dikh gya (sic),” while the other wrote, “Abhi lag rhi hai aged…. she is getting old (sic).” Another user defended her saying, “So whats the big deal?” These people bitching Malaika and praising Jennifer Lopez and Jennifer Aniston!!! Hypocrisy is at its height (sic).” 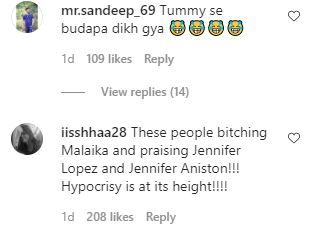 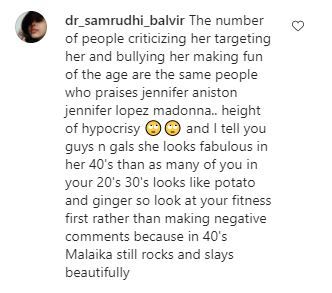 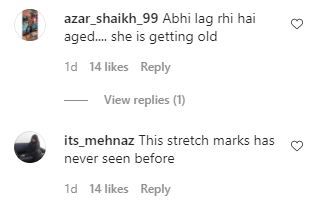 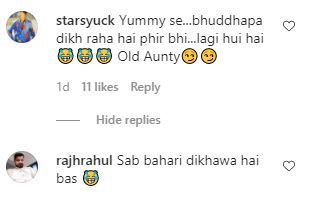 Malaika is a fitness freak and often shares her pictures on Instagram leaving fans stunned. From performing yoga to sharing her gorgeous pictures, she is a stylish diva and there is no doubt about that. The netizens who trolled her should understand that stretch marks are a natural outcome of the pregnancy and these lines can appear after a sudden change in weight. Malaika, who is the mother of two, has maintained a perfectly toned figure and encourage people to stay fit.

Meanwhile, she often makes headlines for her relationship with Arjun Kapoor. The couple celebrated Christmas and New Year together. In December 2020, they were vacationing in Goa at Amrita Arora’s holiday home and shared stunning pictures from their relaxing holiday. As per the reports, recently she visited the sets of Arjun’s upcoming film, Bhoot Police, to spend some quality time with him.