The film, which released on September 14, has got mixed reviews from critics.

Director Anurag Kashyap has returned with another love triangle story, and this time in the form of Manmarziyaan. The movie stars Abhishek Bachchan, Taapsee Pannu and Vicky Kaushal in the lead roles, and it has got mixed reviews from critics. The film, which released on September 14, is set in small-town Amritsar, and according to Box Office India it did not do well on the first day. Also Read - Anurag Kashyap Reacts to Ravi Kishan's Statement in Parliament, Says 'He Smoked Weed in The Past'

Manmarziyaan made a collection of Rs 3.25 at the box office on Friday, and the response for the movie was good in Delhi NCR and East Punjab. The reason it did not pick up on its first day could be because of its clash with Mitron and Love Sonia, both of which were released on the same day. Also Read - Kangana Ranaut Says ‘I Am Not Ladaku Person, Will Quit Twitter' After With Anurag Kashyap

In the movie, Taapsee Pannu plays Rumi, a hockey player who is very fierce and straight-forward, while Vicky Kaushal plays the role of a cool and carefree Punjabi boy, who is a DJ by profession. Abhishek Bachchan on the other hand, plays Robbie, a sweet and kind person who is a banker. Also Read - Sonam Kapoor, Anurag Kashyap, Zoya Akhtar And Others Sign Open Letter Against Media's 'Witch-Hunt of Rhea Chakraborty' 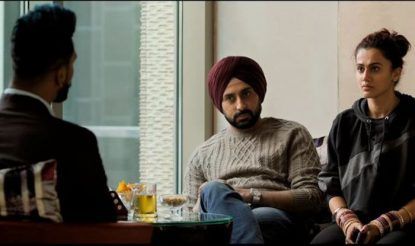 The story is about a woman who is torn between an intense lover and a pragmatist who is ideal husband material. It tells a tale of jilted lovers, broken hearts and family problems with the three main protagonists trying to figure what they really want.

Film critic Taran Adarsh, who publishes reports on the box office collections of Bollywood movies, tweeted the following about the movie:

#Manmarziyaan has a low Day 1… Started on a dull note in the morning, but picked up towards evening… North circuits were better… Biz will scale upwards on Sat and Sun [a norm these days], but real test will be on weekdays… Fri ? 3.52 cr. India biz.

Both Saturday and Sunday are significant to Manmarziyaan’s performance. The business should grow on the weekend, as it always happens. However, the real test for the film will begin from Monday.