Manoj Muntashir Interview: When a Writer Gets Honest on Life, Childhood, Dreams, Career And More!

Exclusive interview: "Meri Fitrat Hai Mastana" is just not the title of his book but an absolutely perfect way to describe him. At least that's what it appeared when writer Manoj Muntashir interacted with India.com on a call for a laid-back chat.

“Meri Fitrat Hai Mastana” is just not the title of his book but an absolutely perfect way to describe him. At least that’s what it appeared like when writer Manoj Muntashir interacted with India.com on a call for a laid-back chat. The writer-lyricist is one of the most popular names in the Hindi film industry today. Apart from writing memorable Hindi movie songs like Teri Galiyan (Ek Villain), Teri Mitti (Kesari), Kaise Hua (Kabir Singh), Phir Bhi Tumko Chaahunga (Half Girlfriend) and Tere Sang Yaara (Rustom) among others, he has also written the Hindi dialogues for the Baahubali series, and scripts for many TV shows including Kaun Banega Crorepati and India’s Got Talent. Also Read - R Madhavan's Interview With His 'Dhokha' Gang on Being a 'Lover Boy', Creating a Mystery-Thriller And More | Watch Video

The recipient of the Yash Bharti Award (a state honour from Uttar Pradesh government) and many other popular film awards, Manoj Muntashir has now created history by being the only lyricist to have got six nominations in four major categories at the Mirchi Music Awards. He is also nominated in the category of Best Lyricist at the 65th Filmfare Awards. Here, he opens up on things beyond work – affection for his mother, leading a prosperous life, breaking myths of being a writer, fulfilling dreams and creating a league with honesty and beauty of words. Excerpts: Also Read - Madhur Bhandarkar Speaks on His 'Brand of Cinema' And Why He Made a 'Desi' Babli Bouncer With Tammannaah Bhatia - Watch Interview

What is your most beautiful memory associated with writing a Hindi movie song?
When I wrote Teri Mitti (Kesari, 2019), it was initially planned as just a minute-long song. But, when I submitted the lyrics, Karan (Johar, producer) and Anurag (Singh, director) liked it so much that they asked me to make it longer. It was finally turned into a six-minute-long song. The most beautiful thing about this track is the last few lines. I was in London when I got a call from the makers to make it long and was already missing India. The lyrics go like: Also Read - The Kashmir Files Star Darshan Kumar Speaks on Film Missing Oscars 2023 Nominations - Watch Exclusive Interview 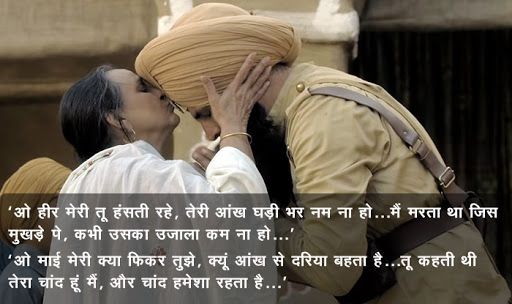 I wasn’t given any brief about weaving these emotions. When I wrote it, the director found it so beautiful that he decided to retain it even though not much about a mother-son relationship is shown in the film.

So you have found only good people in the industry… people who always valued your work like how Anurag and Karan did when you wrote Teri Mitti for Kesari?
I would be very honest in telling you that it’s a rumour that the industry doesn’t have enough people to appreciate your talent. I think it’s about being in the right place at the right time and bring out your best to the table. You have to be honest with your writing and it’s important to understand the director’s vision while writing because your words have to fit the situation. I have always been fully committed to my director’s vision and to my craft… that balance always helped me to achieve what I wanted.

How important is it for a writer to understand a director’s perspective while writing songs for a movie?
I think that’s the only thing that brings novelty to any song. Every writer operates through a certain vision which is his/ her personal and if a brief is not given about what the makers want, writing becomes mundane. The moment you align yourself to a story, you welcome new thoughts. It doesn’t matter whether I believe in a story or not, whether I believe in a character or not, but it’s important to think like the character… as if you are a part of that story. How else would you write for a character like Kabir Singh? 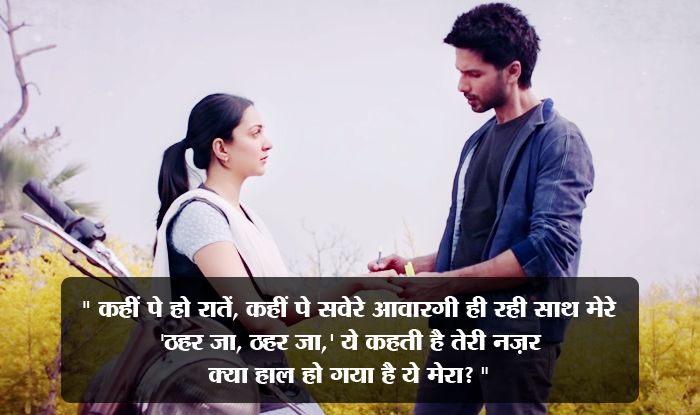 Do you mean that a writer has to be as much committed to a character as an actor is?
I think a writer has to show more commitment than an actor. An actor is visible on the screen, he has an advantage of connecting with the audience through his facial expressions, but as a writer, I have only words. I can only write to establish that connection with the audience and I have to do that through the character. It becomes my duty to provide language to that character. It should always look as if Kabir Singh is singing, not Manoj Muntashir.

Please tell me about the entire process of writing songs for a movie.
There are majorly two processes that a writer follows in the Hindi film industry. First, you read the story and write something and it gets composed by the music director. Second, you read the story and you are given a tune and you have to weave your words into it. For example, I was given a tune for Teri Mitti and I filled it with my words. However, in the case of Teri Galliyan, I wrote the lyrics first and it was later composed into a song.

At what stage does a lyricist come in while making a movie?
When the screenplay is completed, the makers usually leave a few spaces that are marked for the insertion of songs. Both the lyricist and the music composer are called together. We read the story and start brainstorming about the kind of songs that need to be included in the film. 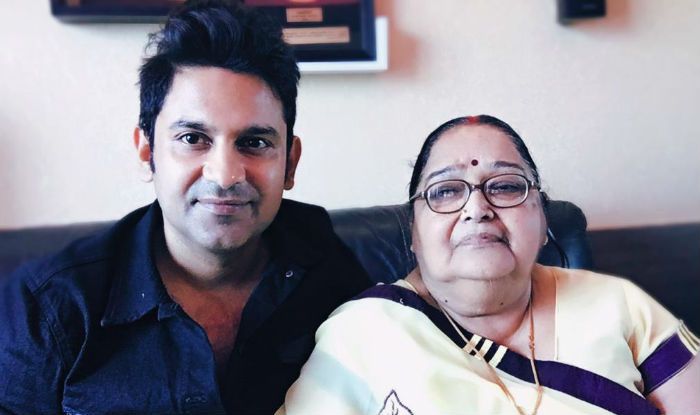 Would you like to talk about your childhood? You have mentioned briefly about the struggles of your mother during your growing-up days in your book titled Meri Fitrat Hai Mastana. Please elaborate.
I spent my childhood in Amethi, Uttar Pradesh. My mother was always very fond of me. She used to tell everyone: ‘Honge bahot log duniya me, mere Manu jaisa koi nahi hai’ (there’s no one in this entire world like my son Manu). I used to feel really embarrassed because I was always an ordinary-looking boy and didn’t have any special skills. At the age of 15-16, I realised my mother will never understand my embarrassment and the only way to deal with it is to turn what my mother believes in reality. I decided to do something big. My mother was always very passionate about my education.

My father had lost his job when I was quite young. My mother took the charge then and she used to earn an amount of Rs 500 per month at the job.

What year was this?
This was around 1985. My mother used to spend Rs 300 per month on my school fees and the rest Rs 200 were spent on other household needs. There was only one convent school in Amethi then and I studied there. I also remember how I always heard stories about successful people from her every night before I went to bed. It was really inspirational. Whatever I have achieved today is all because of my mother’s hopes and blessings.

How does Mumbai treat you when you come here from a small town like Amethi?
This city really troubles you a lot. Mumbai is like a sea. You throw something into the sea and you’ll realise that the waves throw it back at you. The sea keeps doing this until a point when it finally absorbs it. It’s also like that girlfriend who will trouble you a lot, throw fits at you and will really get on to your nerves but in the end, she will love you unconditionally forever. 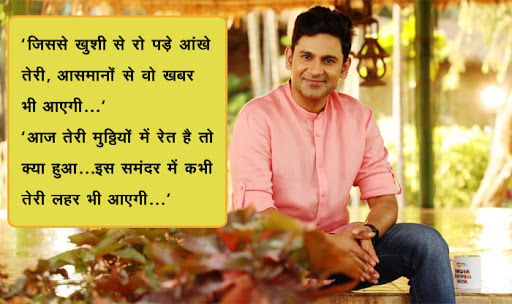 You always mentioned that you put your heart and soul into writing. But, has there been an incident where you weren’t ready to emotionally invest yourself in a project – when you didn’t want to write but you did out of professional duties?
This incident goes back to the time when I was writing a comedy show for television. I had not really started writing for the movies by that time. My son, who was just a year-old then, was hospitalised for a serious illness. He was lying on the bed and the doctors were poking him with all sorts of painful needles. The doctors had asked us to pray for his better health and we were feeling unimaginable emotional stress. I had to write a comedy in that situation. I sat near the bed and was trying to figure out how to feel the comedy when there’s so much that’s going inside me emotionally. But, it was a job. I had to do it. I did.

What projects are you working on now? Also, Ek Villain 2 has been announced. Are you thinking of recreating the Teri Galliyan magic?
Yes, absolutely. I have been roped in to write the songs for Ek Villain 2 and it’s a beautiful journey altogether. Revisiting the beauty of Mohit Suri‘s vision is an experience in itself. I am writing the songs keeping in mind the benchmark that tracks like Teri Galliyan have already set among the audience. The music of Ek Villain 2 has to match the level of Teri Galliyan, for sure. I am also working on Bhuj: The Pride of India which features Ajay Devgn. I have another movie starring Ajay titled Chanakya which is being directed by Neeraj Pandey. The work on the Saina biopic is also on. 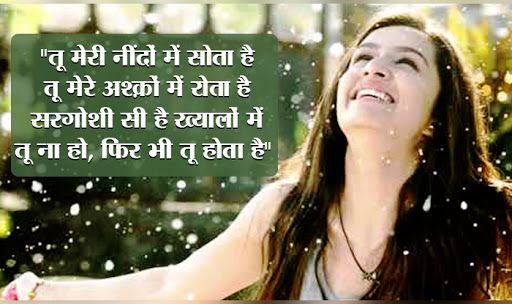 Writer’s remuneration has been a big topic of discussion in the industry. What’s your take?
I believe that writers are paid well. There are good remunerations for writers in the industry. And I am not being diplomatic here. It depends on what value are you bringing to the table. When I wrote the dialogues for the Baahubali series, I was paid so well that I could have bought a flat in Mumbai with my remuneration. What I am trying to say is that it’s important for the writers to realise that it’s a market. You can’t run away from that fact and you’ll have to market yourself to stay relevant. Writing for films is not as sanitised as writing for a book. You see the budget of the films today and then you asses the power of the words you have written for that film. You have to be sure of what you have written first. And then you also get royalty today. Even if you have written 50 songs in your lifetime, you can sit back, relax and have fun in life.

Thank you for chatting with us.