Margarita With A Straw movie review: A moving tale of a special life

Kalki made me forget Laila is damaged. She left me confused about the definitions of the normal. 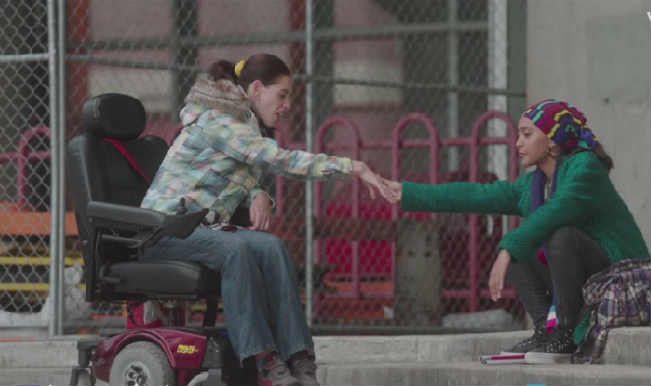 At the end of this exquisitely designed film I wasn’t sure whether I had just watched a film about a very special life of a specially-abled girl who can’t move a limb without her mother’s help but has the hots for… let me see, at least two boys and one woman. And, we are still counting. (Read: Margarita With A Straw: Farah Khan, Gulshan Devaiah, Radhika Apte attend screening of Kalki Koechlin’s next)

Or, was I watching an extraordinary rendition of the mother-daughter relationship done in shades so distinctive and deep that you leave behind a part of your being with the film when you leave the theatre even as you take home something invaluable with you. Margarita With A Straw, so named because its cerebral palsy-afflicted stubbornly spirited heroine would have the cocktail in a tumbler with a straw, but have she will, is a film that leaves you profoundly enriched.

The film creates a crisscross of complicated relationships among human beings who seek normalcy in their strenuously challenged lives both within their homes and outside. But the beauty of it is, the tangles in which human beings find themselves in their quest for kinship tends to solve itself in the end. It’s the way life works, so what’s the big deal? Says this remarkable film.

Shonali Bose’s film never stops to wonder what Laila’s life would have been like had she been …well, normal. Being normal!… Now that’s a question which the film’s brilliantly written script, never stops to entertain.

Laila’s aspirations take her through a geopolitical emotional and sexual journey that finally leaves her and us, wiser.  All three levels of Laila’s education are textured into the plot with a minimum of fuss. Shonali Bose cuts through moments and montages from Laila’s life with luminous austerity.

We see more than what meets the eye. Not only because the film’s editors (Monisha Baldawa and Bob Brooks) have done their jobs effectively but also because this film believes in saying a lot about the quality of human life without wasting time in self-pity.

Tears, you will see, don’t get a chance to roll down cheeky cheeks here. It is precisely because the film refuses to ruminate on the tragic grandeur of life that it creates a sense of unassuming dignity in the lives that we see on screen, none more bravely and emphatically dignified in adversity than Laila. As played by the exceptionally gifted Kalki Koechlin Laila is bit of a tease…not just with men but with life as well. Kalki makes every encounter in Laila’s life from Delhi University to New York University special and memorable.

I specially cherish the mother-daughter scenes between Revathi and Kalki. They are heartwarming and heartbreaking because they never forget to be completely truthful to the given (tragic) context while striving to be supremely cinematic. This is as opportune a moment as any to say Kalki in the central part shines in a space where her character’s disability assumes no pre-ponderance.

This is a major transcendental triumph for the actress, as much of her speech is spoken in a slur. Kalki takes Laila beyond the world of words. It is those eyes…The goddamned wounded eyes. They serve as a window to Laila’s soul.

Every actor playing character as varied as Laila’s kid brother to her Sardarji father seems pre-destined to play the part that has chosen them. Debutant Sayani Gupta as Laila’s militant friend brings to her character an undeniable scrupulosity. But it’s Kalki and Revathy who hold the delicate plot together. Their scenes together, and apart, moved me in ways I’ve not been moved in a movie for a very long time.

The film’s emotional affluence is matched by its technical finesse. The art work and locational detailing unfussy and matter-of-fact, as well as the casting of every character is so correct, you wonder how the director got it so right with so little self-congratulations. Sip and savour the delicate tastes of life in Margarita With a Straw. This is a moving heartwarming lyrical and yummy tale of a girl so sassy,she defines the eternal quest to seize the day.

After watching her flash her middle finger at a poor unsuspecting woman for sympathizing with her disability I am sure of one thing — No one after watching this film would ever dare to tut-tut at a wheelchair again. Not unless you enjoy being ridiculed for thinking ‘normal’ is all about standing on your feet and sleeping with members of the opposite sex.

And do give a standing ovation to Kalki. That girl in yellow boots has thrown off those flashy shoes got onto a wheelchair and wheeled herself into eternal fame. Kalki’s performance and the film left me speechless. Kalki made me forget Laila is damaged. She left me confused about the definitions of the normal.