Meeting Amitabh Bachchan: A chat with the legend of Indian cinema (Interview)

He is the greatest legend of all time in Indian cinema, and recognised all over the world for his talent. He is Amitabh Bachchan. Excerpts from a chat.

He is the greatest legend of all time in Indian cinema, and recognised all over the world for his talent. He is Amitabh Bachchan. One may not be meeting him for the first time as a journalist, and even having had a two-second appearance as a journalist in his movie Rann, the excitement of seeing the great Amitabh Bachchan always remains the same. After all, how many people get to meet the legend in person and have a heart-to-heart chat with him? We talk exclusively to Mr Bachchan about his latest film Te3N, and also his first one, Saat Hindustani. He also intensely speaks about how if he spends his emotions on a role and situation, he may not have those emotions in real life if a similar incident occurs. Also Read - When Irrfan Khan Said 'Yaar Homi, Mujhe Acting Se Bahut Mohabbat Hai'

First up, we notice that the Big B, as he is fondly called, is not wearing two watches on his wrist, as he is wont to do. (Yes, two watches on one wrist!) We ask him why he is wearing only one watch today, the secret behind it, and pat comes the reply, “Yeah. No, no (secret). Just so you can ask me that question.” We laugh. The mood is set for a good interview. Also Read - Chehre Producer Says 'Can't Take Benefit of Rhea Chakraborty's Situation' After She Goes Missing From Poster

Mr Bachchan gets talking about his character in Te3N and the story of the film. “Because the film is a mystery, we cannot reveal much about the story and my character. He is a middle-class Anglo-Bengali character living in Kolkata; he is my age – 74; probably from the Indian Administrative Service and retired. He’s almost resigned with life, not too physically strong and doesn’t have much of a voice. But there has been a tragedy of his grand-daughter,” he says, adding, “He is somebody not out to take revenge. He just wants to know who did it and why. That is the search. Whether he does succeed or not, that is the film.” He further informs, “Te3N is set in Kolkata, and we have shot in all real locations. There are no sets in the film.”

So, could he relate to the story of Te3N more because he has two grand-daughters, little Aaradhya Bachchan and Navya Naveli? Does he always draw from real life?

“I don’t know what goes through our minds when we enact such moments. Mostly it is already written by the writer and directed by the director. I dunno whether you draw from your personal lives. There are those moments,” he explains. “I’ve often thought and spoken about it. In our films, there are many occasions where you have lost your dear one or lost your mother, where you have to emote and cry. I think I’ve had 10 films where my mother has died and you want to enact to the best of your ability. And God forbid, when that happens to you in reality, you wonder whether you’ve already spent that emotion 10 times before. So I dunno if I when my mother died, the emotion that I expressed – was it sufficient? Was I able to express myself? I’m not so sure! That’s the question mark that remained in my mind.”

He adds, “There are many occasions that are so realistic in cinema that when it happens in real life, you may have accidentally spent that emotion. In reality it’s gonna just happen once, your mother’s going to die just once, but on screen it’s happened 10 times. So, I really don’t know what’s the correct answer or the correct emotion for this. You have to live with it.”

Having done so many award-winning roles, was the role in Te3N challenging for him? “Every film is a challenge, even now, every day. Going in front of the camera is not an easy task. It’s tough. You are nervous, as you don’t know what’s gonna happen once the camera starts. You question yourself and ask the director ‘Am I doing OK?'”

Sharing more on his acting process, Bachchan reveals, “Sometimes in the middle of the night you wake up and you feel, ‘Oh, I should’ve done the shot this way’. You want to improve upon it. Some of us go through this. Every film is different, as the process of creativity is not constant. You want to improve.”

Big B admits that some of his roles or situations may be similar to his other films. “There are only seven stories in the world – you have to create yours through them. Every mystery film will have a question mark. Every romantic film, you know that these two are getting together in any case, but you take three hours to get there.”

Mr Bachchan informs us that he signed Te3N because he had worked with director Ribhu Dasgupta and producer Sujoy Ghosh before, on Anurag Kashyap’s television show Yudh (2014) and the film Aladin (2009) respectively. Was it also his love for Calcutta (Kolkata) that made him sign the film? His recent film Piku with Deepika Padukone was based there for which he won much acclaim. “Te3N was supposed to be set in Goa but we couldn’t get permission to shoot there, so I said let’s go to Calcutta,” he says.

In the mood now, Sr Bachchan gets talking about Kolkata and Bengalis, and we listen, as if in a stance. “Yes, Calcutta! I’ve worked there – my first job was there as an executive. Having spent seven-eight years there, it obviously has nostalgic value and it’s always a joy to be there. While shooting, the crowds in Calcutta are passionate and loving; they applaud you, cheer you and are very considerate. They know that when there’s a shot, they will have to be silent. They respect…they are inborn with this kind of a thing. They are familiar with the creative side of filmmaking and what needs to be done. They will never interfere.”

“Bengalis are very intelligent, very conscious, they love to debate, discuss, argue. And they have knowledge of every subject. You pick anybody from the street and you can discuss from Einstein to the latest film. They are very curious to know how things work. Whether it’s the kind of fish, where it comes from, to the latest political thing or standing in front of a painting and discussing it. They have a desire to store things. In the house that we were shooting Te3N, we had a handwritten note of Saratchandra Chattopadhyay! Their houses are beautiful, old paintings and furniture and they won’t change it.” 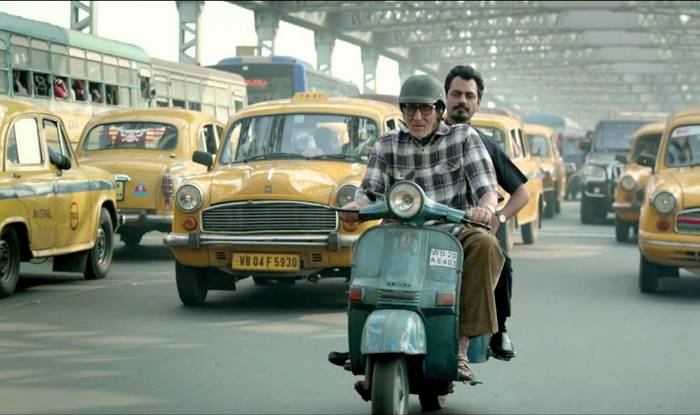 Mr Bachchan thinks it’s a delight of working with Nawazuddin Siddiqui in Te3N and how he didn’t know that he had worked with the actor earlier in an advertisement and also the film Shoebite. “He is such an exceptional talent. He did a small part in my film Shoebite, directed by Shoojit Sircar. Nawaz also told me that we had worked together in a Cadbury ad. I actually went on the Net and searched for the ad and there he was in one small close-up! Working with such actors enhances your performance. You can only be as good as your co-actor. You can be the best actor, but if your colleague is not good enough, he reflects your performance, but I’m gonna look good, only if Nawaz is good or Vidya Balan is good.” 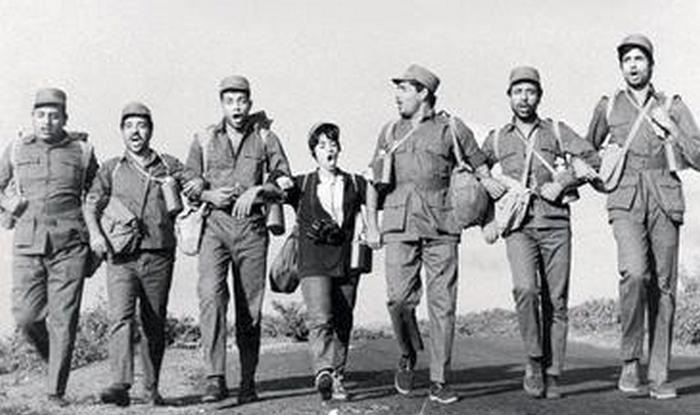 On his debut, the National Film Award-winning Saat Hindustani

Always curious to know about his remarkable act in his debut Saat Hindustani, a black and white classic, India.com asks Mr Bachchan to share his experience working on the film. He seemed to relish the memory of the film, and said, “Saat Hindustani was made by Khwaja Ahmed Abbas. His thinking was very socialistic, very common man, centred around the IPTA movement. When he made Saat Hindustani, he was very conscious about the secular, socialist concept of India. So, why he made the film with seven Indians was because there were seven Indians of different castes and creed. They were fighting for the freedom of a portion of the country.”

Sr Bachchan explains the movie’s remarkable casting. “Having seven Indians was to show that we are one country and fighting for a common cause. Then, in his choice of artistes, I think it was deliberately chosen that he had a Bengali, a south Indian, a Punjabi, a Muslim, a Marathi…and the actors he chose where from those regions, but the roles that he gave them were diametrically opposite to where they came from. So, you had Utpal Dutt who is Bengali playing a Punjabi, an Amitabh Bachchan who is a Hindu playing a Muslim, Anwar Ali who is a Muslim playing a Hindu. Abbas’ whole belief and thinking was that if these seven Indians were today to do something like that, then what? We travelled together, we slept in the forests, in government circuit houses. Abbas Sa’ab used to sleep with us; sometimes there was no electricity and we shot with lanterns.”

Before we left, we chatted about some more things with the Big B, and he was as easy-going as always, calm and collected. After the mandatory selfies with him and such a great chat, we are really looking forward to his performance in Te3N that releases on June 10, 2016. Watch this space for our review of the film!