Anurag Kashyap's lawyer releases an official statement on behalf of the filmmaker: #MeToo movement has been co-opted by vested interests and reduced to a mere tool for character assassination.

Filmmaker Anurag Kashyap, who has been recently accused of sexually harassing actor Payal Ghosh, took to social media to share an official statement by his lawyer Priyanka Khimani. She has mentioned that Anurag Kashyap is deeply in pain by false allegations of MeToo i.e. sexual harassment. The full press release shared by the actor and filmmaker reads as, “These allegations are completely false, malicious and dishonest. It is sad that a social movement as important as the #MeToo movement has been co-opted by vested interests and reduced to a mere tool for character assassination. Fictitious allegations of this nature seriously undermine movement and seek to unconscionably trade upon the pain and trauma of the actual victims of sexual harassment and abuse. My client has been fully advised of his rights and remedies in law and intends to pursue them to the fullest extent.”Also Read - Aaliyah Kashyap Reacts To Me Too Allegations Against Anurag Kashyap: 'Misrepresentation Of His Character, He Is Like Soft Teddy Bear'

Anurag Kashyap had shared a caption along with the post stating: “And here is the statement from my lawyer @PriyankaKhimani .. on my behalf .. thank You” Also Read - Anurag Kashyap's Daughter Aaliyah Reveals How MeToo Allegations 'Bothered' Her: 'This Gives Me Anxiety'

Payal Ghosh had mentioned in an interview with news agency ANI that the director had forced himself on her extremely badly. She even had tweeted “@anuragkashyap72 has forced himself on me and extremely badly. @PMOIndia @narendramodi ji, kindly take action and let the country see the demon behind this creative guy. I am aware that it can harm me and my security is at risk. Pls help!” (sic). Also Read - Sona Mohapatra Takes a Dig at Anu Malik Returning to Indian Idol 12: 'Trash Loves Trash'

And here is the statement from my lawyer @PriyankaKhimani .. on my behalf .. thank You pic.twitter.com/0eXwNnK5ZI 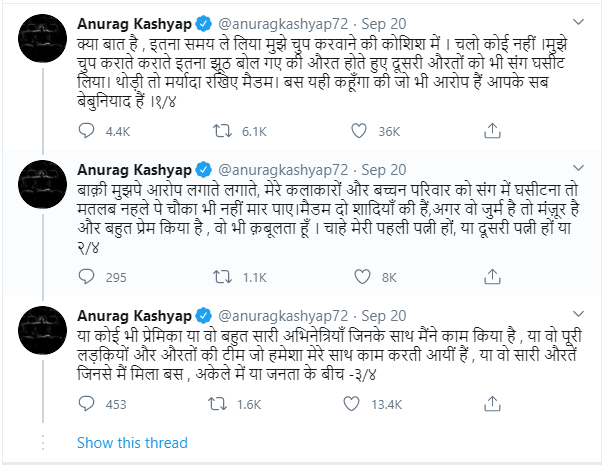 Anurag Kashyap gets support from colleagues after MeToo row. Several celebrities from the industry have come forward to support the filmmaker, saying #MeToo movement should not be misused. “It is the joint responsibility of women and men both to carefully protect the sanctity of #Metooindia … It is a very very very important movement that should not be misused for any other reason but the dignity of women,” filmmaker Anubhav Sinha wrote on Twitter while tagging Kashyap.

Tisca Chopra wrote: “To know my friend Anurag Kashyap is to know generosity, honesty and decency at its core.. even a cursory look at his work reveals his worldview on women.. don’t know a bigger supporter of talent, men or women.”

Filmmaker Hansal Mehta also came forward to support Kashyap through a string of tweets. “I’ve known Anurag since 1996. He was always rebellious. He was always outspoken. He was always passionate about cinema and his friendships. He had a point of view and I often disagreed with it. That did not change our relationship. In 24 years nothing has changed,” he wrote, adding: “I take accusations of sexual harassment seriously and when I heard this young woman accuse Anurag I was extremely disturbed. He is a friend, like a younger sibling and somebody who has been with me through some rough times. He can be brash. He can be stupid.”

Mehta said that he refuses to believe that Kashyap can be a “sexual harasser”. “As I write this I’m pained, troubled and full of questions. For one the timing of leveling these accusations. Then the tagging of our hon’ble PM. This happening at a time when Anurag often against advice has been outspoken and provided a contrarian view on things happening around us. Is he making some people uncomfortable? There are so many questions and they are not necessarily about the allegations leveled against AK,” he added.

Mehta went on to question if “this a witch-hunt yet again? Are they trying to shut up an artist with a dissenting opinion? Where are we headed?” He shared: “And then after hearing the accusation – can this even be Anurag? it is definitely not the Anurag I know. But ultimately truth must prevail. Lies and falsities in such a matter will be a huge disservice to many women out there who are regularly subjected to sexual harassment and abuse (something Anurag has vociferously fought against) and are unable to raise their voices.”

Surveen Chawla, who worked with the filmmaker on the web series “Sacred Games”, termed the claims bizarre. She wrote: “Let them creep.. Let them crawl.. U my friend… As always stand tall… These false flag bearers of feminism…. Opportunism??? They dont honour men like u, for their lack of knowledge in knowing know who u really are, And claims they make that are just so bizarre. Ur life, ur work and the women u create with ur craft… speak volumes about u. I have the privilege to know the real feminist in u, I take the honour my friend to stand for u”.

Taapsee Pannu lent her support by calling Kashyap the “biggest feminist” she knows. “For you, my friend, are the biggest feminist I know. See you on the sets soon of yet another piece of art that shows how powerful and significant women are in the world you create,” Taapsee wrote on Instagram.