Mini Mathur’s Hilarious Comment on Ranveer Singh’s Celebration of ’83 Wrap is All Directors’ Wives Ever!

Taking to his Instagram handle, Ranveer uploaded a boomerang video where he can be seen dressed in his quirky best, raising a toast. The video was captioned, “& that’s a schedule wrap, folks ! CHEERS @83thefilm (sic).” Quick to comment, Mini wrote, “Congratulations!!!! That’s been just about a 563 year long schedule so …about time (sic)” and fans were in splits. Also Read - Aditya Narayan And Shweta Agarwal to Get Married Today, Dad Udit Narayan Says Ranveer Singh-Deepika Padukone Also Invited 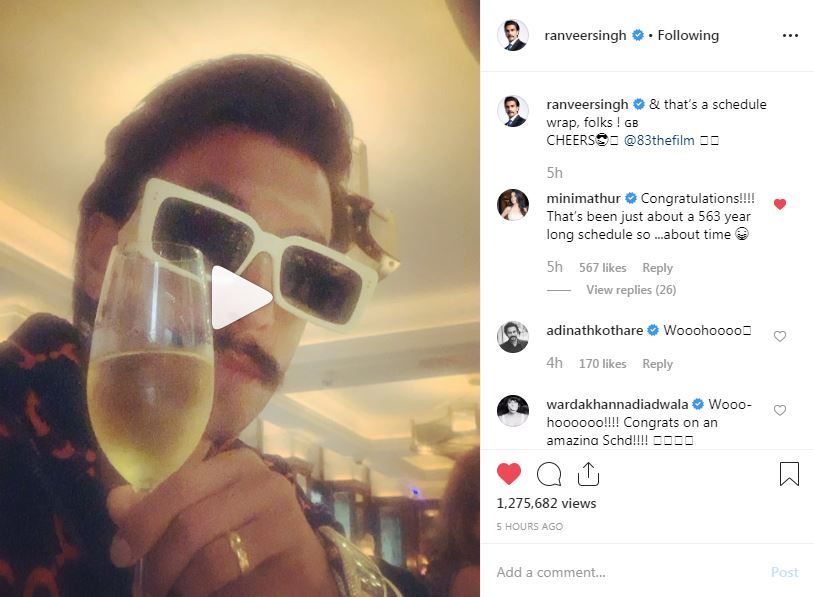 ’83, which traces India’s historic victory at the 1983 cricket World Cup. While Ranveer portrays the team’s captain Kapil Dev, Deepika plays his wife Romi. The film is presented by Reliance Entertainment and is scheduled to release on April 10 next year in Hindi, Tamil and Telugu.

Apart from this, Ranveer also has Karan Johar’s Takht in his kitty. Takht is the period drama based on the Mughal era and chronicles the story of two warring brothers. Earlier, the film was supposed to hit the theatres in the beginning of 2020. However, it has now been pushed towards the end of the year. Filmmaker Karan Johar has begun the preparation for his upcoming directorial Takht. He has started to put every strand in the right place so that when the film goes on the floors with its huge cast Anil Kapoor, Kareena Kapoor, Ranveer Singh, Vicky Kaushal, Alia Bhatt, Bhumi Pednekar and Jahnvi Kapoor, nothing appears dismantled.