Mira shares a bad picture of Shahid on her third wedding anniversary. Take a look

Shahid Kapoor and Mira Rajput are regarded as one of the most beautiful couples of B-Town. Their relationship has always grown stronger with each passing day. The couple tied the knot on July 7, 2015 and has completed three years of marriage. They got married in a hush-hush ceremony, which became the talk of the town. Since then they are giving legit couple goals to everyone. Mira and Shahid made their first public appearance on Koffee With Karan where they spilled the beans about their married life. Mira, who frequently share lovely pictures of her and hubby Shahid on social media, posted a ‘bad’ photo of his superhot husband on his Instagram page to wish Shahid. Also Read - Shahid Kapoor to Make His OTT Debut With Action-Thriller Film Based on Operation Cactus

Mira wrote, “Bad pictures make for the best memories. This is why I love you. Happy 3 baby.” In the picture, Shahid can be seen pouting and it is a close up picture of him and can leave the actor uncomfortable. Also Read - Ishaan Khatter Says He's Not 'Irked' About Being Recognised as Shahid Kapoor's Brother

The couple is constantly seen walking hand in hand while going for a movie, lunch or dinner date. The duo recently made their fans ROFL after Mira literally took over Shahid’s Instagram account and posted a selfie of hers. Also Read - Found Myself Little More! Shahid Kapoor's Wish For Wifey Mira Kapoor on Their Wedding Anniversary is Pure Love

Take a look at the pic here: 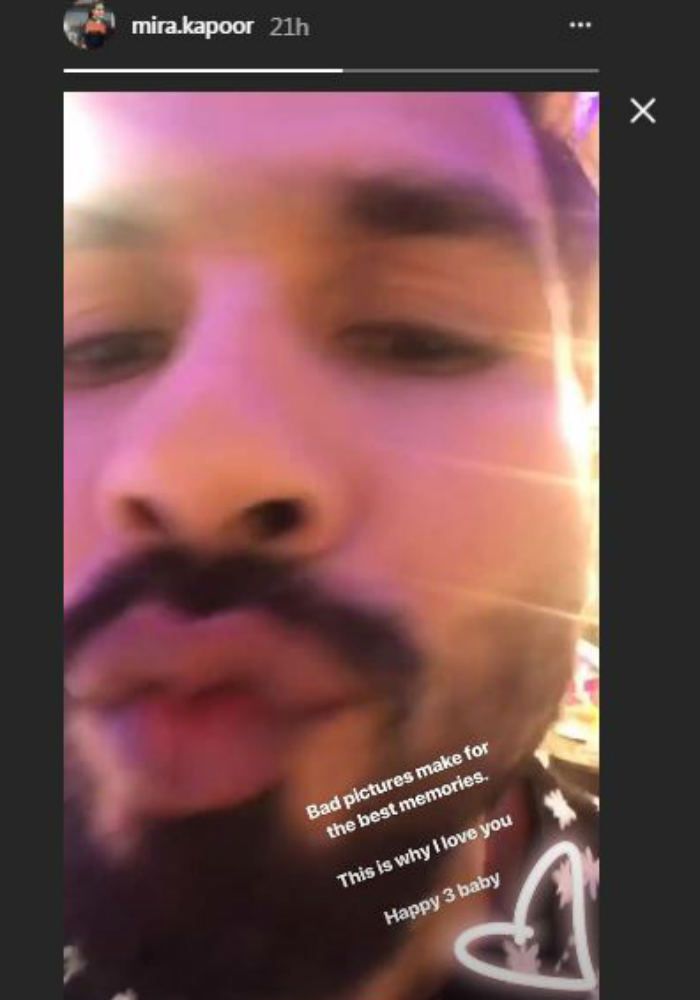 Shahid and Mira are undoubtedly too cute, and their little bundle of joy Misha is the internet’s sweetheart. The happy family of three are now gearing up to welcome yet another baby. A few months ago, Shahid and Mira took to their Instagram accounts to announce to the world that they are rearing to be parents again.

On the work front, Shahid is all set for his next movie Batti Gul Meter Chalu wherein he will be seen alongside Shraddha Kapoor. The movie releases in August 2018. In the movie, Shahid plays the role of a lawyer in Batt Gul Meter Chalu.