Mulk is a film that touches on an extremely sensitive topic, Islamophobia

Taapsee Pannu aka Harpreet Kaur aka Aarti Mohammed has been basking in the glory of Soorma’s success and her role in the film. She is now all set to get even more love from her role in Mulk which fans already can’t stop raving about after seeing the trailer. Also Read - Nirbhaya Case: Bollywood Celebrities Share Their Reaction on Justice Served, Check Tweets

Mulk is a film that touches on an extremely sensitive topic, Islamophobia that is currently being used as a fear mongering tactic by different groups. The film directed by Anubhav Sinha features Taapsee and Rishi Kapoor in lead roles along with Ashutosh Rana, Prateik Babbar, and Manoj Pahwa. Taapsee plays a lawyer in the film and has some hard hitting dialogues that question society’s blame game against one community. While we see very little of it in the trailer, we hear that she has some brilliant monologues that are goosebump-inducing. Also Read - Rangoli Chandel Calls Out 'Dumb Wannabe Feminist', Targets Taapsee Pannu-Neha Dhupia-Karan Johar in Latest Tweets

We heard this from the members of the cast and crew who were absolutely in awe of her monologue delivery in one of the scenes, so much so that a junior artist gave her a note that said ‘You’re going to be at the top in Bollywood.’ Also Read - Thappad Box Office Collection Day 8: Taapsee Pannu's Film Witnesses Jump, Mints Rs 27.84 Crore

Check out the heart-warming note here: 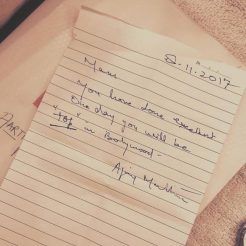 Taapsee had a 3-minute monologue that she gave with complete emotion and feel that made a few artists teary eyed as well. We have always known about Taapsee’s acting prowess, time to see it again in Mulk!!