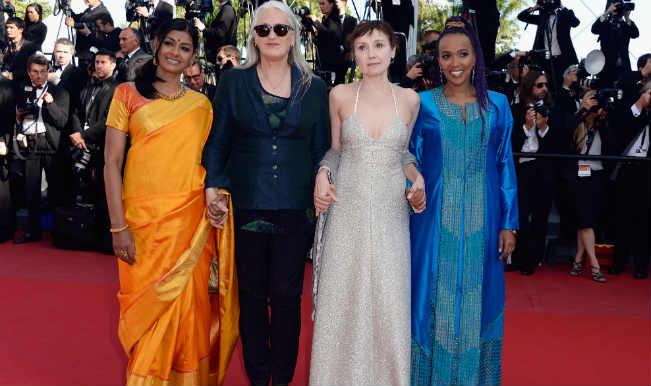 Kolkata, May 25: Actor-director Nandita Das visited the just-concluded Cannes Film Festival to look for producers and financiers for her upcoming film on famous Urdu short story writer Saadat Hasan Manto. The actress’ earlier visits to the Cannes festival was occasioned by her being on the festival jury twice, but this time it had a purpose. Known for her roles in films like “Fire, Earth and Bawander”, Nandita says she got to watch only two films this time. “But then I had gone there for a purpose and wanted to focus on just that… This time I had to find producers and financiers for my upcoming film on Manto and answer questions that were not always about the creative aspects of the project. After all pitching for a film was a completely new terrain for me,” Nandita told PTI. Cannes, she said, is always a mixed bag of glamour and a space where all kinds of films found their place. (READ: Cannes 2015: Team Masaan at Cannes; emotional over standing ovation) Also Read - Why Leading Fashion Designers Don't Style TV Celebs? Hina Khan Raises a Poignant Question That Needs Attention

“Here directors are truly celebrated and often the standing ovation and applause they get can go on till your hands hurt. Sadly back home, much of the press is about who wore what, while there is lot else that is far more significant that happens.” According to her Manto believed in connections of the mind and heart and didn’t give much importance to national identities and boundaries. “So an International film with many different collaborators, is totally in the spirit of Manto. In fact that is the reason why I want even a Pakistani producer to come on board. Also Read - Mahesh Bhatt-Nandita Das-Anurag Kashyap And 26 Other Celebrities Release Statement Against ‘Witch-Hunt’ of Anti-CAA Protestors by Delhi Police

“They (Pakistan) claim Manto to be their greatest short story writer and we claim he is one of India’s best. If we divide Manto like this, it will be against his spirit and therefore I want a shared sense of ownership, if at all one can own him!”, she said. Nandita had first read Manto in English when she was in college and then a few years later she had bought his Urdu collection “Dastavez” in Devnagiri and was struck by his simple yet profound narratives and his insightful capturing of people, politics and the times he lived in. “While undoubtedly many of his (Manto’s) writings could lend themselves to a dramatic film, it is the story of his own life that is supremely worth telling,” she said. Nandita said she has been nurturing the idea of making a film on Manto for more than 10 years, even before she made “Firaq”. But she had felt overwhelmed by the large canvas – a period film set in Bombay, Delhi and Lahore and the writer’s work exploring the big events of his time like World War II, end of colonial rule and the Partition.

She said while she felt unsure of her depth and range of experience then to portray a man like Manto, today she feels better equipped – both emotionally and creatively. She researched the life of Manto, who authored 600 short stories and 100 radio plays before his untimely death at the age of 42, over the last year. She has even met his three daughters in Pakistan who shared details about his life.
Nandita, daughter of famed painter Jatin Das, says Manto seemed familiar to her as she felt she was reading about her father. “Baba is an artist who is engaged beyond art, a maverick who is intuitively unconventional, a misfit who is often misunderstood… Even his bluntness isn’t too different from Manto,” she said.

The similarity, she says, extends even to their unusual sensitivity and their non-relationship to money. On her work, the actor-director says her plate is “over-full” with work on Manto script, besides rehearsals for Cineplay of Vijay Tendulkar’s “Khamosh, Adalat Jari Hai”, working with an Australian producer to write and direct a film about an Indian woman’s journey of self-discovery through her interactions with the aborigines of Australia. Mother of five-year-old son Vihaan, Nandita also writes a monthly column and does advocacy work for issues close to her heart.