Shamas Siddiqui has denied an allegation that he sexually assaulted his niece. Check tweets.

Nawazuddin Siddiqui‘s niece has accused his brother Shamas Nawab Siddiqui of sexually harassing her. Speaking with Times of India, the complainant revealed that the incident took place when she was nine-years-old. “I was tortured a lot. As a child I didn’t understand thinking it was my uncle, but when I grew up I realized it was a different kind of touch,” she said. Niece also added that her parents were divorced and she was raised by a stepmother. Now, the latest development is — Shamas Nawab Siddiqui opens up on being accused of sexual harassment. In a series of Tweets, he denies all the claims.Also Read - Nawazuddin Siddiqui’s Birthday: Top 6 Movies, Web-Series of Actor to Watch on Zee5, Netflix, Prime

Shamas wrote, “How can someone misguide the law and file the same case with different statement at @DelhiPolice, when there was no name of @Nawazuddin_S in the earlier statement given 2 years back to Court & the case is in #UttrakhandHighCourt as well.” Also Read - Netizens Troll Ranbir Kapoor, Alia Bhatt Again After They Return From Maldives, Say 'Nawazuddin Siddiqui Was Right'

In another tweet, he wrote, “It clearly indicates the motive and the person behind publicising this fake things in media. Truth will be uncovered soonest. @CPDelhi #NawazuddinSiddiqui”. Also Read - Nawazuddin Siddiqui Disappointed With Celebs Vacationing Amid Pandemic: 'In Logon Ne Maldives Ko Tamasaha Bana Rakha Hai' 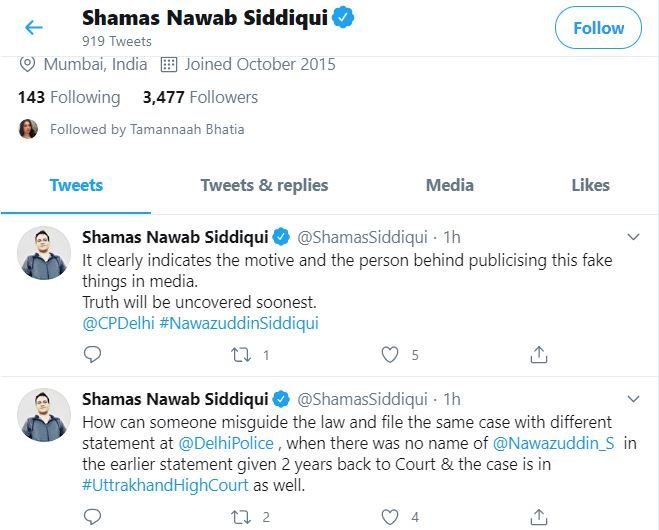 Nawazuddin Siddiqui’s wife Aaliyah Siddiqui also took to Twitter to express her thoughts. on the same. Her tweet read, “This is just the beginning. Thanking God for sending so much support already. A lot will be revealed, shocking the world as I am not the only one who suffered in silence. Let’s see how much of TRUTH money can buy & who all would they continue to BRIBE.” Following this tweet, she also spoke about how people who turn a blind eye to child abuse just in order to protect the image of the predator is also equal to a criminal act. Adding further she also mentioned how such individuals covering the truth and putting a child’s life on stake should be punished.

“Children need care & support. No one should take advantage of any helpless child. I am happy to know that every person who has information about child abuse is punished for failing to report the offence. Non-reporting of cases to protect the image of person or family is a bigger crime,” she wrote in her next tweet. 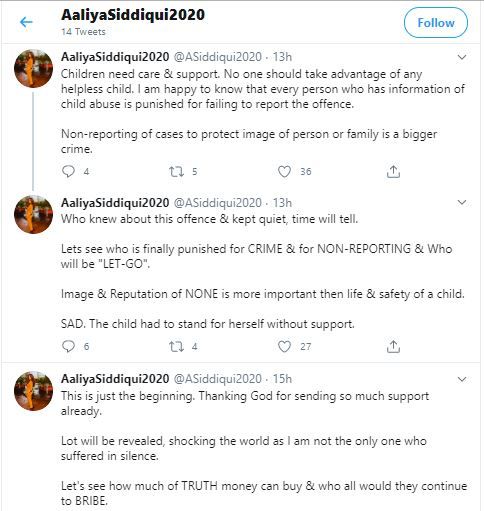 Nawaz’s niece also said that she has not received any support from Nawazuddin Siddiqui. His niece added, “Nawaz bade papa once asked me what I want to do in life, I told him all that was happening with me and that I felt mentally disturbed. But he said there is nothing like that. I thought that atleast bade papa (Nawazuddin Siddiqui) would understand, he lives in a different society and would have a different mentality. But he was like ‘chacha hai, aisa kabhi nahi kar sakte’.”