Anu Malik was accused of sexual harassment by not one or two but many women working in the industry. However, the National Commission For Women 'closed the case' due to 'lack of evidence' in the matter. Read on.

Anu Malik stepped down as the judge of Indian Idol months after several allegations of sexual harassment were levelled against him by various women including singer Sona Mohapatra, Shweta Pandit, Neha Bhasin, Caralisa Monteiro and former Indian Idol producer Danica D’Souza. Now, in a letter written to an official of Sony Pictures India by the National Commission For Women, it is mentioned that they have cleared Malik’s name in the case due to the lack of evidence against him. Also Read - Anu Malik Speaks on Quitting Indian Idol 11 Following #MeToo Allegations, Says 'Channel Wanted me Back But I Decided to Take a Break'

Mumbai Mirror published a report with the official copy of the letter written by Barnali Shome, Under Secretary, NCW, to Madhuri Malhotra, Head, Standards & Practices, Sony Pictures India Private Limited dated January 3, 2020. The letter mentioned that on the basis of the reply given by the company in a letter dated December 6, 2019, and taking the ‘cognizance of Sona’s Twitter post’, NCW has ‘closed the case due to lack of communication/ substantial evidence sought from the complainant.’ Also Read - Sona Mohapatra Reacts on Anu Malik Stepping Down From Indian Idol, Says It's a 'Symbolic Victory'

The report by the daily quoted NCW chairperson Rekha Sharma mentioning that the decision is temporary considering the case can be re-opened any time when the complainant is ready to submit ‘more evidence’ and ‘documents’ to support her allegations in the case. She revealed that the complainant didn’t appear before the commission even after 45 days of waiting and didn’t submit the documents required in the matter. Sharma added that the complainant had informed about other women in the case who were allegedly harassed by Malik but none of them appeared to file any complaint before the commission. Therefore, the NCW had to close the matter. Also Read - After Sexual Harassment Allegations, Anu Malik Steps Down as Judge From Idian Idol 11

Sharma was quoted saying, “Responding to a complaint, we wrote to the complainant. She said she was travelling and whenever she returns, she will visit us. We waited for around 45 days. We had also asked for some documents, but after that, she never responded.” 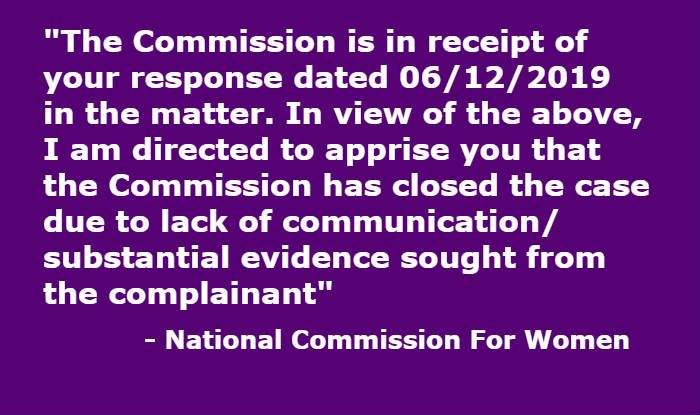 Earlier, Malik had issued an open letter in the entire matter stating that both he and his family had been suffering a lot due to the ‘unverified allegations’ of sexual harassment against him. He wrote that he had been feeling ‘helpless, cornered and suffocated’. He said he had been looking out for justice after being in so much pain for such a long time.

I just finished an event in Paris where I was representing India at an ISRO sattelite launch by a Europeon agency & came out elated with the response to my views & singing only to hear & read this heartbreaking news on social media. That statement of the NCW chairperson is wrong. I collated multiple testimonies painstakingly & mailed it to them within a few days of them asking for it. Got a one line reply “Kindly send further submission (if any) regarding the complaint.” to my ten pages. No dear no regards, just the above. I requested to speak to Ms Rekha Sharma to discuss it. Received one liner, cryptic responses to all. They made no effort to engage or connect with either me or Neha Bhasin or Shweta Pandit amongst several testimonies that were in the public domain. I believe in due process & systems & did exactly what I was asked to do. They could have shown some interest to write back or talk about the matter & actually meet us. They didn’t. What more documents cAn you provide in cases of sexual harassment & assault? Can we record or shoot it while it happens? Is that even possible. The ominous manner in which they communicated in one lines scared me I’ll be honest, it is like I was the criminal in their eyes. I dread to think about how they would treat women who don’t have a voice or means to tell the world anything. Going to Hyderabad after Priyanka Reddy gets gangraped to console the family & give quotes to media should not be their only job. This is a live case. So many victims & their families are living their trauma everytime a person like Anu Malik flaunts himself on national TV. NCW should have at least tried to even talk with a few of us. It is the least we can expect for the system. This is not over. I am not one to give up the good fight easily. I’ll take it to my funeral pyre if required. This was the only ray of hope for a whole movement in India where all perpetrators went scot free. Sony TV was a partner in crime by riding on this for publicity for their show as a marketing theme. India will not forgive them or Anu Malik & his supporters this easily. We will fight this together. #India #MeToo #sonamohapatra

Meanwhile, Sona Mohapatra has written a long post explaining how the NCW didn’t take any effort in talking to her and the other complainants and treated her like she was the criminal in the matter. The singer mentioned how she collated all the documents the NCW asked her to submit but got a ‘one line cryptic reply’ asking her to submit ‘more documents’ in the matter.