Nia Sharma slams slut-shamers on social media like a BOSS!

Nia Sharma proves it that she is unaffected by haters on social media and continues to do what she loves.

Telly actress Nia Sharma has been on Cloud 9 ever since she made it to the list of Top Sexiest women in Asia. She has been sharing a lot of pictures from her sensuous photo shoots and we must say she is slaying it on social media. The telly star proved to the world why she rightly deserved to be on this list of Sexiest Asian Women. Recently, Nia also shared a sensuous video where she is grooving in the most seductive way. Moments after she shared this video, the actress started getting negative comments on social media. Also Read - From Matiz to Volvo XC90 D5 Inscription! Nia Sharma Buys a Swanky New Car Worth Rs 90 Lakh

While her fans couldn’t stop praising her, some jerks couldn’t handle her sexiness. Nia got slut shamed for sharing a video with a bikini top over her light-hued distressed jeans. Just while the actress was chilling after sharing her latest creation, few haters began to troll her and slut shame on Instagram. Although, Nia maintained silence, her fans come forward in her support. They started attacking the haters and a mini-war broke her social media profile. (ALSO READ: Hotness Alert! Nia Sharma shows off her bold dance moves on Instagram; gets bashed by her fans!) Also Read - Nia Sharma Flaunts Her Curves in Latest Picture While Posing From Vanity Van

Nia shared a dance video with the caption that reads, “@photuwalas @thank u @stylebysugandhasood for this video.. i tagged u finally @shraddhamishra8 love love @tonykakkar #waada #4thfebruary” Also Read - Nia Sharma Buys a Stunning House in Mumbai, Shares Photos From Her Balcony 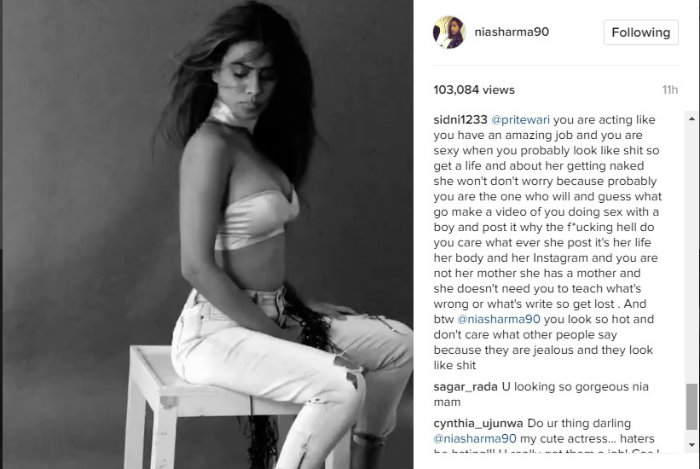 With utmost dignity, Nia gave a tight slap to the slut-shamers with her latest Instagram post. She shared a yet another video showing her sexy moves. She gave an apt caption to the video which reads, “Oops! Here’s one more from the photoshoot!! Ready to slut-shame a girl again? Go aheadddddd.. I’ll post five more…Coz thats exactly I got this shoot done.!! And thats exactly how I’ll post pictures from the same! I appreciate everyone who took out time from their absolutely worthless lives to write filthy long comments on my previous video.! I got u job again” Nia also boldly challenges the hater to troll her further as she is completely unaffected with all the shittiness going around her.  (ALSO READ: Jamai Raja actress Nia Sharma posts bra less picture on Instagram, gets slammed by fans!)

Oops! Here’s one more from the photoshoot!! Ready to slut-shame a girl again? Go aheadddddd.. I’ll post five more…Coz thats exactly I got this shoot done.!! And thats exactly how I’ll post pictures from the same! I appreciate everyone who took out time from their absolutely worthless lives to write filthy long comments on my previous video.! I got u job again! 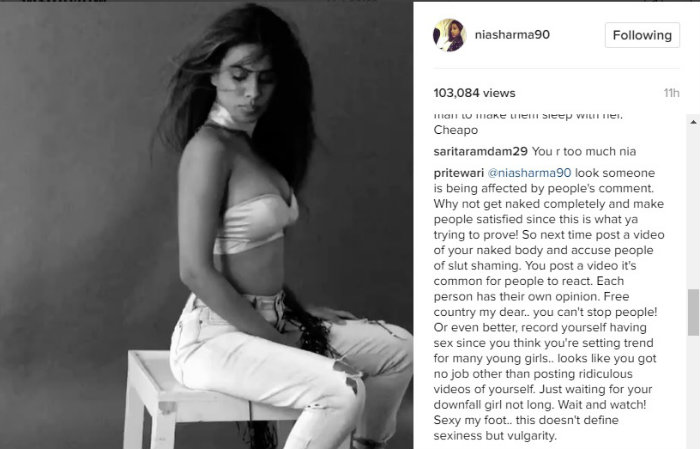 Earlier in the day, Nia also revealed what her series of videos are hinting at. The Jamai Raja actress is actually planning to release a video with Tony Kakkar and the videos are a promotional stint for the same. Sharing an intimate picture of her posing with Tony, Tia writes, “#waada with @tonykakkar releasing on 4th feb on @desimusicfactory @photuwalas @onboardlive” (ALSO READ: Jamai Raja actress Nia Sharma’s latest photoshoot is mercurial hot!)

Is Nia Sharma’s reaction to the haters perfect?