Nick Jonas and Priyanka Chopra miss each other as latter returns to India for the next schedule of The Sky is Pink.

Priyanka Chopra and Nick Jonas are head over heels for each other and their Instagram posts say it all. Priyanka is currently in India for the next schedule of her upcoming film The Sky is Pink. While Priyanka is having a ball with her mother Madhu Chopra, sister Priyanka Chopra and brother Siddharth Chopra, hubby Nick is missing his wife. Also Read - Parineeti Chopra Carries Rs 1 Lakh Gucci Bag While She Enjoys a Day Out on The Streets of Europe, SEE PICS

Nick took to his Instagram stories to share a picture with his wife and captioned it, “Missing you” along with a heart emoji. Priyanka shared the same and wrote, “Babuuuu! I have so much fomo! Miss u too” and added a kiss emoji. Also Read - Priyanka Chopra Jonas’s Yellow Leather Bag is Worth Whopping 3 Lakhs, Check it Out 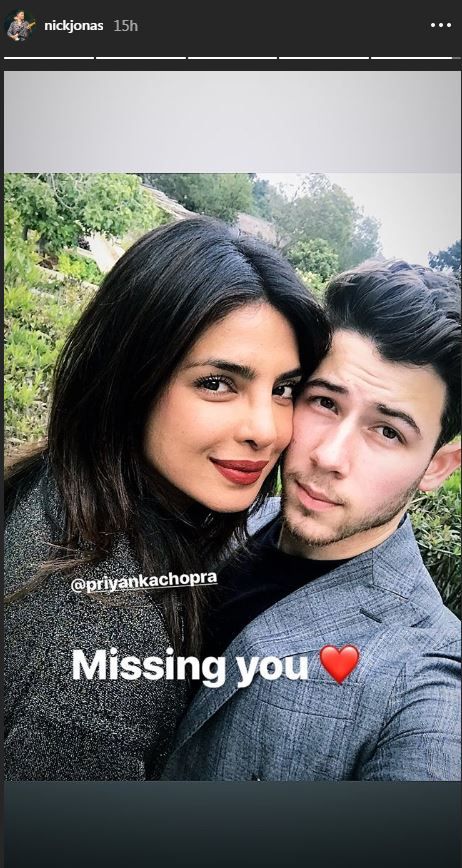 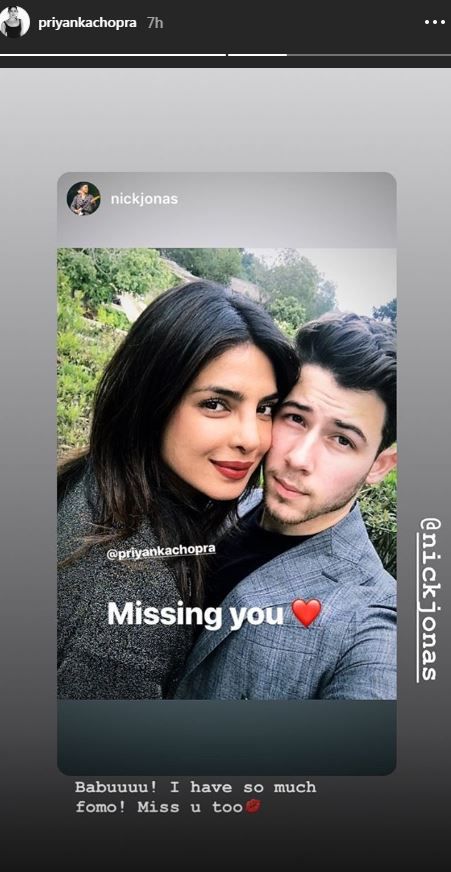 Yesterday, Priyanka shared pictures with the ‘Chopra FamJam.’ She along with her sister Parineeti and brother Siddharth celebrated her mother Madhu’s birthday in advance. She captioned it, “The Chopra FamJam ! Happy early birthday ma.. we love you!!”.

The couple recently attended the launch of Chasing Happiness, a documentary on the lives of the Jonas brothers. At the event, Priyanka grabbed eyes in a thigh-high slit black dress while Nick looked dapper in maroon jacket and pants. 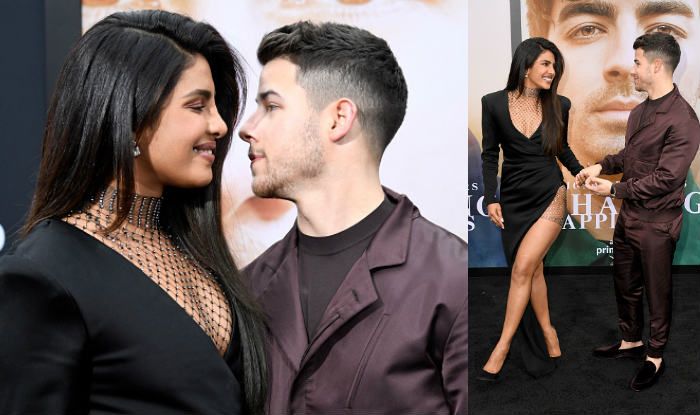 Priyanka earlier praised the Sucker singer at Tina Brown’s 10th Annual Women in the World Summit. She said, “I call him ‘Old Man Jonas’. That’s my name for him ‘OMJ’. He’s such an old soul, extremely smart, so good for me because he grounds me so much. ‘I’m a wild child, I do whatever I want, whenever I want and he always supports me”.

On the professional front, Priyanka will next be seen in The Sky is Pink with Farhan Akhtar and Zaira Wasim. She is currently in New York with her husband and will soon return to India to shoot for her upcoming film.