Priyanka Chopra and Nick Jonas have been in the news lately for their marriage. Nick, who is head over heels for the ‘desi girl,’ recently opened up about his type one diabetes. He went on to reveal that he has been suffering from the disease since the age of 13. He took to his Instagram to share about his battle with diabetes since his teens and how he has taken care of himself and always made health his priority. Many fans commented on the post but there was one comment from a special someone that will melt your heart. It is that of Priyanka where she wrote, “Everything about you is special with or without diabetes”. Also Read - Priyanka Chopra Jonas, Nick Jonas Enjoy Working Out in Sun Amid Coronavirus Lockdown

This proves that not just Nick but Priyanka too loves everything about her soon-to-be husband Nick and no flaw of his can make him less special for her. Also Read - Priyanka Chopra Jonas Washes Hands While Singing Hubby Nick Jonas' Song- Watch Video 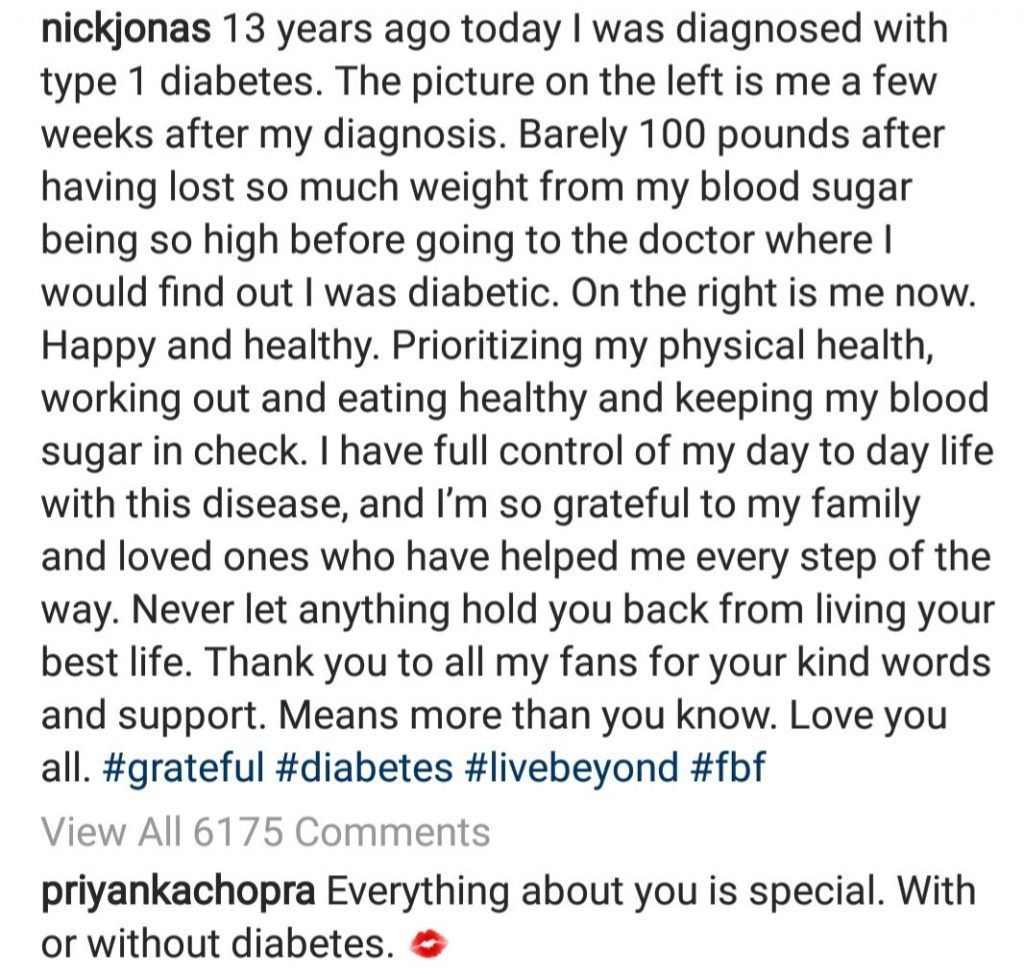 Two months earlier, his wife-to-be Priyanka revealed that she suffers from asthma and that there is nothing to hide about. Priyanka opened up on Twitter and wrote, “Those who know me well know that I’m an asthmatic. I mean, what’s to hide? I knew that I had to control my asthma before it controlled me. As long as I’ve got my inhaler, asthma can’t stop me from achieving my goals & living a #BerokZindagi”.

13 years ago today I was diagnosed with type 1 diabetes. The picture on the left is me a few weeks after my diagnosis. Barely 100 pounds after having lost so much weight from my blood sugar being so high before going to the doctor where I would find out I was diabetic. On the right is me now. Happy and healthy. Prioritizing my physical health, working out and eating healthy and keeping my blood sugar in check. I have full control of my day to day life with this disease, and I’m so grateful to my family and loved ones who have helped me every step of the way. Never let anything hold you back from living your best life. Thank you to all my fans for your kind words and support. Means more than you know. Love you all. #grateful #diabetes #livebeyond #fbf

Fans are now eagerly waiting for the couple to soon tie the knot. The duo are reportedly getting married at Taj  Umaid Bhawan Palace, Jodhpur. The dates of their wedding ceremonies and the location are yet to be confirmed by Priyanka and Nick. Reports suggest that PeeCee will be arriving in Jodhpur along with her in-laws, Denise and Paul Kevin Jonas Sr. to see how the wedding preparations are going on.