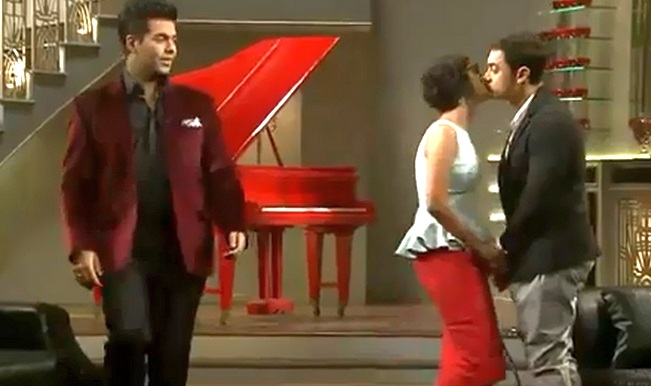 Now that’s a first for Aamir Khan. The actor is famous for kissing his heroines on screen in almost every movie he has starred in – right from Holi to 3 Idiots. But as far his real-life partner is concerned Aamir is not used to a public display of affection. Also Read - Kangana Ranaut Attacks Aamir Khan For His Old 'Intolerance' Controversy After Being Booked in Sedition Case

But on Koffee with Karan Season 4, Aamir’s first appearance on Karan Johar’s popular show, the actor indulged in some PDA. No, not with KJo, of course! But with wifey Kiran Rao. Also Read - Faisal Khan On Aamir Khan: How Does Faisal Khan Ever Break Out of Aamir Khan’s Shadow?

As soon as Kiran walked in wearing a white top and red tube skirt, we knew she would grab the attention of the two men. Karan held her hand, greeted her and she hugged him. And as soon as she saw her hubby, she said, ‘Hi baby’ and both husband and wife came close for a quick kiss on the lips.

Too quick for us to even go awww, but it was cute all right. And definitely a first for Aamir the shy and reclusive guy of B-town! Check it out in the video below, at counter 09:53.