Los Angeles: Ahead of Oscars 2021, Bollywood actor Priyanka Chopra wishes good luck to the team of The White Tiger as the film has been nominated at the Oscars 2021 in the Best Adapted Screenplay Category. The 93rd Academy Awards is all set to kickstart in a few minutes at the Los Angeles Rail Station instead of the usual Dolby theater. On early Monday morning, Priyanka Chopra took to her Instagram story to share a BTS picture of hers from The White Tiger set and wished the team the best to sore at Oscars 2021.Also Read - Priyanka Chopra Spills The Beans on Jee Le Zara, Raising Kids in Scary Times: 'World is a Bit Fractured' 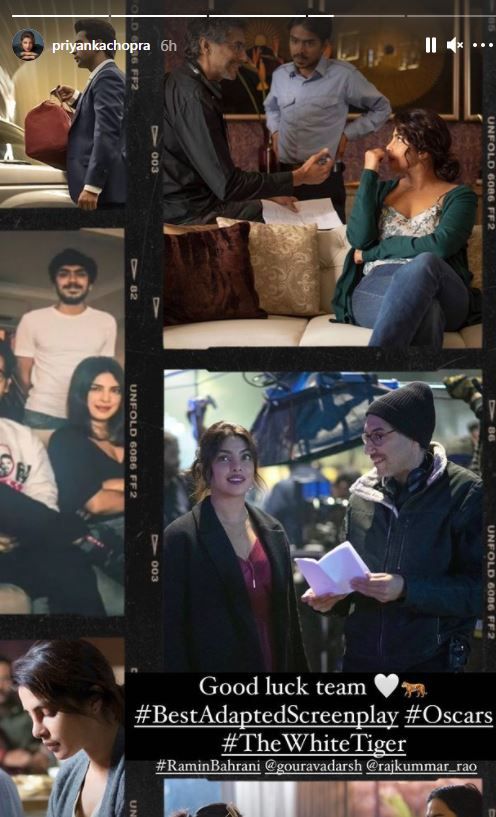 The White Tiger features Priyanka Chopra, Rajkummar Rao, Vijay Maurya and Adarsh Gaurav (who was nominated in the lead actor category at BAFTAs). Released worldwide on Netflix on Jan. 22, the film immediately became a breakout for the streaming giant. The film is directed by Ramin Bahrani (who has previously directed 99 Homes). In the film, Priyanka and Rajkummar are seen as an affluent couple, who has been living with their family in India after returning from the US for their business. Adarsh is seen as their driver, Balram Halwai. Priyanka Chopra essays the role of Pinky Madam, a first-generation immigrant in the US, who is married to Ashok (Rajkummar). Also Read - Priyanka Chopra Meets With Accident, Shares Photo of Bruised Face - Fact Check

Oscars 2021 or the Academy Awards which will be telecasted on April 26 in India at 5:30 am at Star Movies. Star World will also repeat telecast the ceremony at 8:30 pm on Monday. One can also watch the ceremony on Oscar.com or on their official YouTube channel. Amid the coronavirus pandemic, only the nominees, their guests, and the show’s presenters will be allowed to enter the hall. Also Read - Priyanka Chopra in Graphic Shirt And Insanely Hot Shorts Turns Heads at Nick Jonas' Baseball Match