Padmavati controversy is gaining heat with each passing day. After several protests in parts of Gujarat, Maharashtra and Rajasthan, the Rajput Karni Sena have taken to the streets in Bengaluru, Kerala against the release of the Shahid Kapoor, Deepika Padukone and Ranveer Singh film. Holding placards of Deepika’s Padmavati poster with BAN written over it, the outfit is demanding a ban on Sanjay Leela Bhansali film.Also Read - Akshay Kumar's Prithviraj To Ranbir Kapoor's Shamshera, When YRF's Upcoming Movies Will Be Released? Check Here

The members of the said group have been active throughput the nation, seeking a ban on the film since they feel that the director Sanjay Leela Bhansali has distorted with historical facts. They fear that releasing the film in its current form will be a disrespect to their Rajput queen Rani Padmini and bring dishonour to Rajput community. Also Read - Ranveer Singh Starrer 83 To FINALLY Release This Christmas | See New Poster 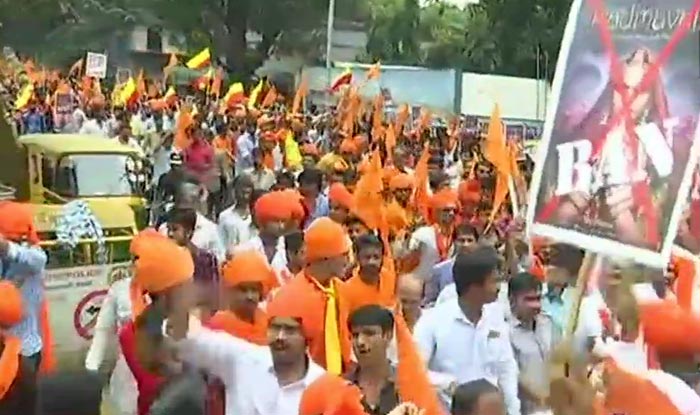 Earlier today, a protest in Kota, Rajasthan turned violent after some members belonging to the Rajput Karni Sena vandalised a cinema hall. As per reports, the theatre was screening the film’s trailer. We hear that the attack was a reaction to Deepika Padukone’s statement that said that the film Padmavati will release despite all odds. Also Read - Sooryavanshi Release Date Out: Akshay Kumar-Katrina Kaif's Film To Have Diwali Release

Talking to Mid-Day about the attack in Kota, Karni Sena spokesperson Vijendra Singh Kalyanwat said, “If the actor reacts to us, this is our way of giving it back. We will do whatever we can. Hum kanoon ko haath main kya, humare kadmon main bhi lenge! We have written our history with our blood and we won’t tolerate Bhansali distorting it.” With all that is being said and done against the release of the film, only time will tell if Padmavati will hit screens on its slated date, December 1.