Payal Rohatgi Gets Into Legal Trouble After Her Controversial Statement on Safoora Zargar, Says ‘Not Mocked Muslims in General’

Payal Rohatgi into Legal Trouble Once Again After Her Tweet on Safoora Zargar Creates Outrage on Social Media, Says 'I Have Not Mocked Muslims in General'.

Actor Payal Rohatgi is often gripped into controversies, thanks to her statements on social media platforms. This time again, she did something similar when she tweeted about Safoora Zargar, who is locked up inside the jail for allegedly inciting Delhi riots. A pregnant Safoora was denied bail recently and that created an uproar. Now, a police complaint has been filed against Payal for allegedly promoting enmity on the grounds of religion and for her prejudicial acts in allegedly distressing the harmony using public platforms. Also Read - 'They Cry For An Elephant But Have No Empathy For A Woman': Twitter Enraged After Pregnant Safoora Zargar Denied Bail Yet Again

Advocate Ali Kaashif Khan has filed a police complaint at Amboli police station in Mumbai against the actor for her abusive tweets on Twitter. He confirmed the news with SpotboyE and said, “I had already filed a Criminal Complaint against Payal Rohatgi in the Oshiwara police station for registration of FIR which is now pending before sessions court at Dindoshi, Mumbai, the court took cognizance had issued her summons and once the lockdown ends she has to be present before the said court.”

Stating she has ‘no fear of law’, he added, “Despite the same, she has no fear of law, she has no respect for the law of land, she doesn’t believe in the constitution of India, thereby only spreading hate against Muslim community, making religious disruption, agitating Hindu Muslim hatred and war in the country.” 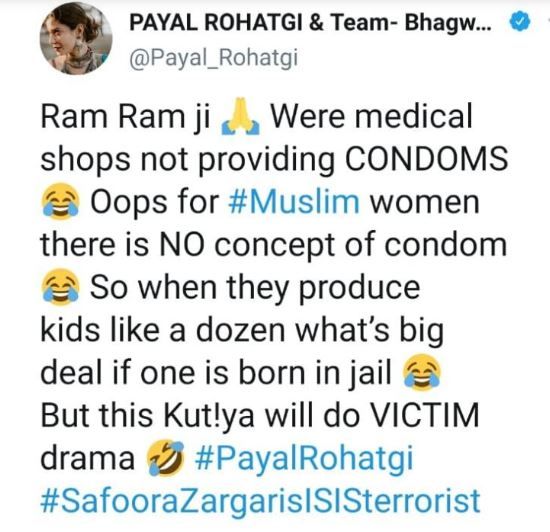 The lawyer even stated how Payal had faced jail recently and pointed out that she was arrested by the Rajasthan police. He was quoted as saying, “She has even faced the jail recently when she was arrested by the Rajasthan police. I have now come across 2 latest tweets made by her where she is speaking talking extremely dirt with regards to Muslims, and the same proves how dirty and cheap are her thoughts. I have therefore lodged another Complaint against her now in Amboli police station to register FIR against her.”

“She has no work in Bollywood so she is breaking the integrity, brotherhood, harmony in our country by breaking several laws and having no respect whatsoever”, he further added.

Payal too spoke with SpotboyE and claimed that the lawyer is a ‘wannabe’ and wants ‘publicity’. Calling him a fake lawyer, she said that he tried to trap her with her opinion on Zaira Wasim quitting Bollywood. She was quoted as saying, “This man is a wannabe who wants publicity. He has tried this nonsense before as he is a FAKE lawyer. He tried to trap me with my opinion on Zaira Wasim quitting Bollywood. Everyone can have an opinion in India not only Muslims. I have not mocked Muslims in general but a particular Muslim terrorist Safoora Zargar whose pregnancy is the bone of contention who calls our PM a terrorist after burning Delhi. Rest you can talk to my lawyer”.