Pink the courtroom drama on women's safety has superlative performances by its lead cast. A must watch!

Amitabh Bachchan movie Pink has been in the news for its important subject of women’s safety and the film delivers the message very well, without being too dramatic. The courtroom drama has excellent performances by Amitabh Bachchan, Taapsee Pannu, Kirti Kulhari, Andrea Tariang, Angad Bedi, Dhritiman Chatterjee and Piyush Mishra. The Shoojit Sircar film is not likely to be watched by many families together who have young kids because of its bold subject of sexual abuse. But ideally it’s a film that should be watched by young kids and especially teenage boys in how not to treat a woman. Also Read - Amitabh Bachchan Is Proud of Son Abhishek's The Big Bull - Read What Big B Has To Say

Pink is a suspenseful courtroom drama, as are all courtroom dramas because we don’t know what the verdict is gonna be and what actually happened. Pink will instantly remind you of the Delhi gang-rape incident of December 16, 2012, that shook the nation, After the incident that was fatal for the victim, many more rape and sexual abuse cases have begun to be reported to the police. Sadly, some culprits have also been ‘inspired’ to indulge in similar crimes with women, little girls and boys and even babies! What has happened to our nation? Amitabh Bachchan as lawyer Deepak Sehgal in Pink draws a conclusion to this effect – that it is our boys who need to be ‘saved from women who wear skirts, jeans, tops and drink’. Of course, he says that sarcastically, What he means is the men need to be educated and conditioned to respect women and understand that her no means NO! Clothing, drinking, smoking or even her smile or casual touch DO NOT mean that she is available! Also Read - Amitabh Bachchan Talks About COVID-19 Restrictions in Maharashtra: 'Time To Reassess, Refurbish'

Pink begins with a fight scene and a group of boys with their leader Rajvir (Angad Bedi), a politician’s nephew, being taken to hospital in Delhi. Young working girls Minal Arora (Taapsee Pannu), Falak Ali (Kirti Kulhari) and Andrea (Andrea Tariang) are running helter skelter and worried. It is not clear what has happened. The girls complain to the police about the sexual abuse they have faced at the hands of the men at a resort in Surajkund. But a case is filed against the girls instead at Surajkund police station, and especially against Minal for attempt to murder, as Rajvir has injuries on his head with stitches. More fake and serious charges like prostitution are stamped on the women, and teasing on social media follows for Falak. 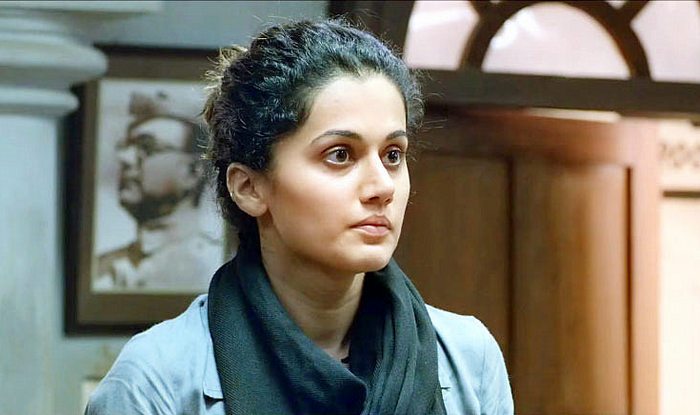 Minal is in police custody and has no way out. Their neighbour, lawyer Deepak Sehgal played by Amitabh Bachchan, helps the girls in the nick of time. He is suffering from bipolar disorder and has a wife on deathbed in hospital. He has quit practicing law because of his ill health. But seeing the plight of the girls, and also because he has seen Minal being kidnapped by the men in a car in the park, he takes it upon himself to get back into his profession. Will Deepak Sehgal manage to win the case against the powerful men? ALSO READ: Akira and Pink: Sonakshi Sinha and Taapsee Pannu’s films are all about women’s empowerment – here’s a look

Thespian Amitabh Bachchan delivers as always in a powerful role. As Deepak Sehgal, he does not play to the gallery, as is the case in many courtroom dramas. Instead, his face is kind and sensitive to the situation and the girls’ dilemma at all times. As the aged, indisposed, lonely, angry but kind lawyer, Big B not once doubts the women. He can sense their innocence and also because he has seen Minal being picked up in a car by force.

Pink has a good amount of suspense, built right from the beginning. The film does not play out the abuse scenes in a voyeuristic way but actually makes you cringe, which is good. A far cry from Bollywood movies of the 1970s and ’80s where rape scenes were used for entertainment in masala flicks. Just like Udta Punjab thankfully did not show Alia Bhatt’s character’s rape in order to titillate, so does Pink – it refrains from making a mockery of the sexual abuse, as often happens in such films.

As mentioned earlier, the performances are good making the film gripping to watch. The film’s locations look authentic too, like in every Shoojit Sircar film. Pink is not overly realistic, it’s just real. It brings forth some extremely important issues regarding women’s safety.

The film’s music, direction and editing are superlative. (Scroll down for verdict and rating)

Why was Minal Arora quiet in court about the second time she was assaulted in a moving car with tinted windows? Why was Deepak Sehgal quiet when he had seen her being kidnapped for some time and even saw her return in a dishevelled state? Was that scene put in by director Aniruddha Roy Chowdhury purely for the Nirbhaya effect? Even the thought of this makes one feel sick!

Another important point is that the parents or family of the girls and especially Minal are not really involved in the court case and that seems a little weird in the Indian scenario. However modern they may be, in a normal situation at least one of these girls may have been taken home for good and grounded, and probably married off sooner than later!

Also, fighting such cases against powerful people like politicians in the capital may not always have an ending desired by the victim. As we know, in most such cases, it’s an uphill task to overcome the power and prejudice. It has been shown as relatively easy in Pink, we feel.

Even with its drawbacks, we recommend you watch Pink. It is not too realistic and does not go the Madhur Bhandarkar way in showing every little detail and predictable reaction. Neither does it go the Damini way in drama, although the Rajkumar Santoshi film had set a benchmark for socially relevant commercial cinema. Pink is a powerful film that may well hammer in the message once and for all – a girl’s clothing or mannerisms, or her habits such as drinking are in no way an indicator that she is available! More importantly, when she says NO, it means a definite NO. Do not attempt to touch her without consent, even if she is your wife or girlfriend or even a sex worker. This film should be watched by men for sure.