Mahesh Bhatt directorial Sadak 2’s trailer released on August 13, gets the maximum number of dislikes on YouTube. It has become the most disliked trailer after receiving over 4.2 million dislikes on YouTube within 24 hours of its release. While Sadak 2 trailer is trending on number 1, the fans have made sure to tag the makers and let them know that the trailer is trending on number 1 in YouTube.Also Read - Alia Bhatt-Ranbir Kapoor's Wedding Postponed Yet Again By Over An Year, Here's Why

A Twitter user Firdose Shawl pointed out to Pooja Bhatt that even after so many dislikes on the trailer, it was trending on number 1 on YouTube. Pooja Bhatt reacted to the same, saying that both lovers and haters are making sure that the trailer is trending on the topmost position. Bhatt wrote, “Lovers/Haters two sides of the same coin. Gotta hand it to both for giving us their valuable time and making sure we are trending. Thank you for your wishes.” Also Read - Alia Bhatt, Ranveer Singh, Kiara Advani, Nora Fatehi And More Set The Stage On Fire At a Delhi Wedding | Watch 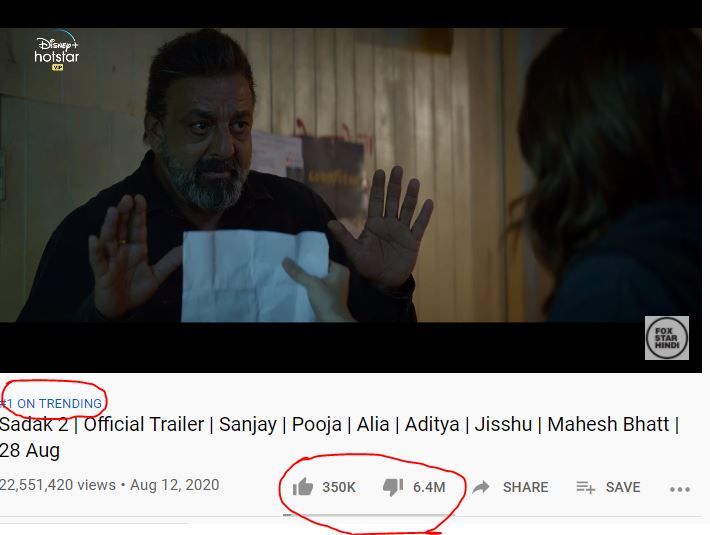 There is a section of people who is excited to watch Sadak 2 and others were not impressed with the trailer and massively mocked the Bhatt family on Twitter. Right after Sushant Singh Rajput’s death, people bashed star kids for their films and therefore they trolled Mahesh Bhatt, Pooja Bhatt and Alia Bhatt for the same. One of the users wrote, “After Sadak2 Alia will be on Sadak like this”. Another user wrote, “Sadak2 trailer released on YouTube, meanwhile boycott gang…. #sadak2trailer”.

Sadak 2 is all set to premiere on Disney+ Hotstar on August 28.