Priyanka Chopra And Nick Jonas Are Honeymooning in Oman, See Pictures And Video

After attending and performing at Isha Ambani and Anand Piramal‘s sangeet ceremony, the buzz is that newlyweds Priyanka Chopra and Nick Jonas‘ have jet-setted to a resort in Oman. Recently, Priyanka took to the photo-sharing app, Instagram and shared a cute picture of a heart drawn in the sand with their initials ‘PCJ’ and ‘NJ’ in it. According to Pinkvilla, the picturesque location with palm trees and a beautiful beach is in Oman. They are honeymooning at a luxurious resort in Oman. Also Read - The White Tiger Teaser Trailer Out: Priyanka Chopra, Rajkummar Rao, Adarsh Gourav Give Us Glimpse Of Their Twisted Lives

Nick Jonas also shared a cute video of Priyanka Chopra watching ‘Elf’ for the first time. In the video, the actress can be seen singing along the beats of the music and having the best time of her life. She can also be seen wearing a white coloured outfit. Also Read - Priyanka Chopra Jonas Announces New Hollywood Film With Celine Dion And Sam Heughan

Take a look at PeeCee’s picture: 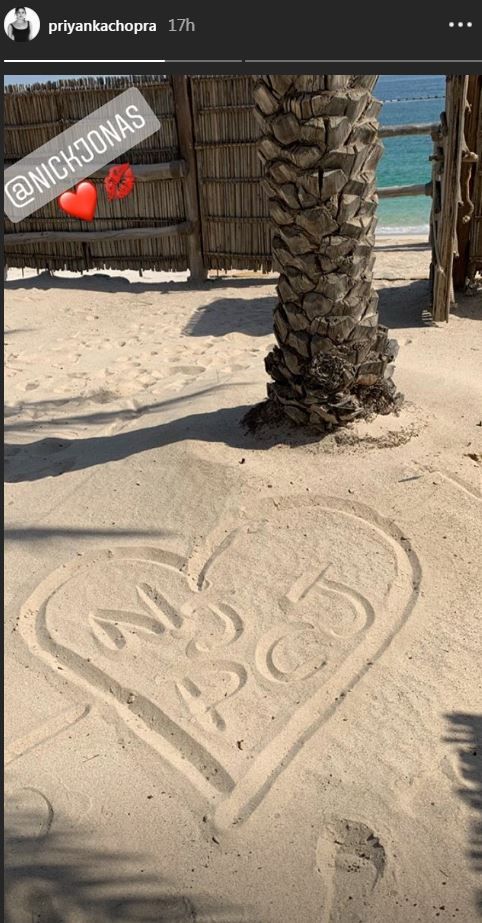 Priyanka Chopra and Nick Jonas got married in two grand ceremonies at Jodhpur’s Umaid Bhawan Palace Hotel on December 1 and 2. The couple tied the knot as per Hindu customs and exchanged wedding vows in a Christian ceremony. The first official wedding pictures of the newlyweds were released by ‘PEOPLE’ on Tuesday, December 4. According to the reports, one more celebration remains, a reception for industry friends on December 20 in Mumbai.

One week ago today ❤️ @priyankachopra