Priyanka was spotted entering the chapel at Windsor Castle.

Priyanka Chopra has finally arrived at Prince Harry and Meghan Markle’s much talked about royal wedding. A few minutes ago, we spotted the Quantico actress entering St. George’s Chapel at Windsor Castle for Harry and Meghan’s big day. The actress is really close to the bride. Earlier when the actress was asked about being the bridesmaid she declined while talking to People magazine and said, “No, I’m not the bridesmaid.” While we all have been waiting with bated breath to see the desi girl at the royal wedding, we have to say, the actress has surprised us yet again with her outing. Also Read - Sara Ali Khan's Blue Lipstick Look Goes Viral: Here's When Bollywood Divas Surprised All With Their Unusual Lip Colours

A while ago, the actress was spotted entering the chapel at Windsor castle defining chic with her latest outing. Dressed in a lilac Vivienne Westwood skirt suit, the actress redefined royalty as she stepped out with Abigail Spencer, Janina Gavankar. We totally love how the actress completed her look with a custom  Philip treacy hat that well perfectly with her skirt suit. Take a look at the pics and videos of Priyanka from the royal wedding below: Also Read - Priyanka Chopra Remembers Her Late Father on His 70th Birth Anniversary With a Heartfelt Old Video 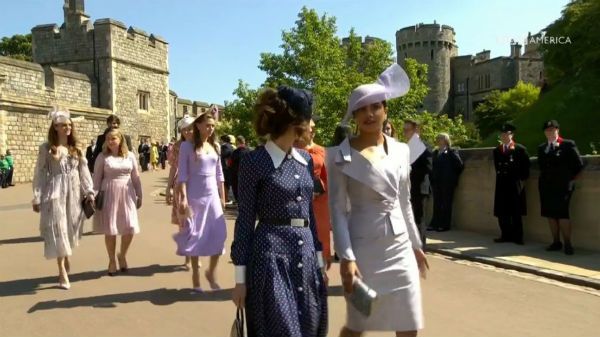 .@priyankachopra looks elegant and radiant as she arrives at St. George’s Chapel in Windsor for the #RoyalWedding! #PCinLondon #RoyalWedding2018 pic.twitter.com/gSL6svxZGT

While talking about Meghan getting married, Priyanka was quoted saying, “It’s so annoying. All my friends are getting married right now and I have like four friends who have gotten married in the span of this year so I’m really upset about it (laughs). Just joking. I’m excited. I’m super excited about her and her big day. I feel like it’s not just going to be life-changing for both of them. It’s life-changing for the world that needs to see strong women as icons and I feel Meghan has the potential to be that.”