Priyanka Chopra took to Instagram to express what Parasite's win at Oscars 2020 means for the world. She praises The Academy for finally opening up to 'representation'.

Actor Priyanka Chopra is one of the many people all across the world who are happy about South Korean film Parasite winning big at the Oscars this year. The actor took to her Instagram stories to share how this win is important. The Bong Joon-ho directorial is the first non-English film to have won the Best Picture Award at the Academy and also the first Asian film to have received the Best Original Screenplay honour at probably the biggest evening of the year. Also Read - 'Patriarchal Much?': Only 5 Women Have Ever Been Nominated for Best Director In Oscars' Entire History

Priyanka posted the picture of Joon-ho looking at his first Oscar trophy and wrote, “It’s so emotional to see an international film like Parasite, in Korean with English subtitled, not only receives such a warm embrace from audiences around the world but also this kind of recognition from one of the most prestigious film academy’s in the world. It’s time for representation. As people and as entertainers, we are one through entertainment. Our craft has the power to transcend borders and languages, and tonight Parasite demonstrates exactly that.” (sic) Also Read - Oscars 2020: Parasite Creates History by Being First South-Korean Film to Win, And May be This is Where 'Representation' Begins For The Academy! 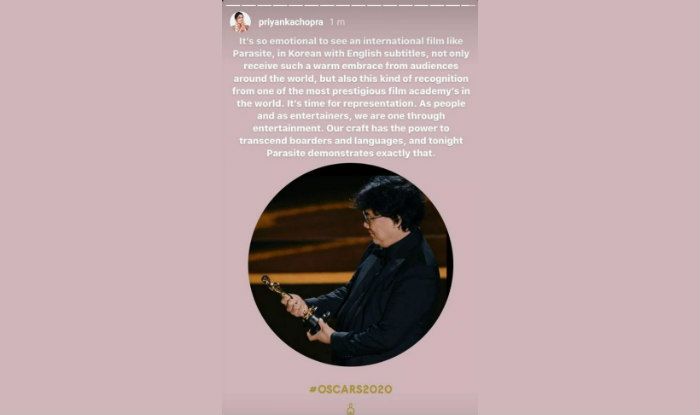 Parasite has created history by winning in four major categories at the Oscar Awards 2020. The film swept away the trophies in the categories of Best Direction, Best Picture, Best Original Screenplay and Best International Feature Film. The Academy’s move of honouring a non-English film comes as a surprise in the time when it is branded as ‘sexist’ and ‘white’ for lacking representation in its nominations. Also Read - Oscars 2020: Parasite Director Bong Joon Ho Giggling At His Award is The Purest Thing Ever | Watch

Meanwhile, Priyanka gave a miss to the Oscars this year. Last year, even though she was not a part of the main ceremony, she attended the Vanity Fair Oscars party with husband Nick Jonas later. This year, however, she recalled her various Oscars looks and posted some stunning pictures of herself from the red carpet of the Academy Awards.