Priyanka Chopra, Nick Jonas’ Wish For Sophie Turner-Joe Jonas on Their First Anniversary is All Hearts

Joe Jonas and Sophie Turner surprised everyone with their impromptu wedding after the Billboard Music Awards on May 29, 2019. The couple followed it up with a formal ceremony on June 29 in Sarrians in Southern France which was attended by their family and close friends. On their first anniversary, Priyanka Chopra and Nick Jonas took to their respective Instagram handle to post lovely wishes for the couple.Also Read - Joe Jonas Reveals The Real Reason Behind Impromptu Wedding With Sophie Turner in Las Vegas, Deets Inside

Sharing the picture, PeeCee wrote, “Happy 1 Year Anniversary! / Love You, both!” (sic) while Nick Jonas wrote, “Happy anniversary Jophie! Love you guys”. In the picture, Joe Jonas and Sophie Turner are posing and smiling on their wedding day as they walk down the aisle after exchanging wedding vows. Also Read - Joe Jonas Reveals Plans For His First Wedding Anniversary With Sophie Turner 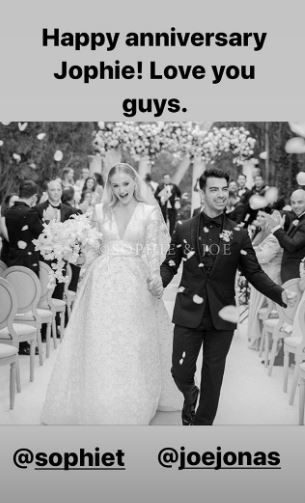 Meanwhile, Joe and Sophie are currently expecting their first baby. As per media reports, the couple might welcome the baby in first half of July. They have been spotted several times over the past few weeks in Los Angeles as they take a stroll on the streets. The couple also took part in Black Lives Matter protests in early June.