Meera Chopra has filed an FIR against online trollers for allegedly abusing and threatening her with acid attack, rape, and murder.

Actor Meera Chopra, who’s a cousin to Priyanka Chopra, has been making headlines after a section of people, who call themselves fans of popular Telugu actor Jr NTR, slut-shamed her. In the latest update, Meera has lodged an FIR against online trollers for allegedly abusing and threatening her with acid attack, rape, and murder over social media. Telangana police has filed an FIR against them. First, she filed a cyber-complaint against the trollers with the help of the National Commission for Women (NCW), which has taken up the matter with Telangana Police and an FIR has been registered with Cyber Cell.Also Read - RRR Song 'Dosti' Released: Ram Charan, Jr NTR Bring Together 'Two Opposing Forces' This Friendship Day

She was allegedly abused and harassed on social media after a Question and Answer session with her followers. It all started when Meera was asked about her favourite actor, to which she replied: Mahesh Babu. Soon after that, she was asked her opinion on Jr NTR, she replied: “I don’t know him. I am not his fan.” Also Read - Priyanka Chopra Sells Two Apartments For Rs. 7 Crore; Rents An Office For Rs. 2.11 Lakh Per Month – Check Her Total Net Worth

Her answer did not go down well with a section of social media users and soon after this, she was allegedly bombarded with abuses, murder threats, rape threats, character assassination and threats against her parents. Also Read - Priyanka Chopra Slips Into Hot Blue Bikini As She Gets Soaked In The Sun For Bold Photoshoot

Hyderabad City Police, Cyber Crime Inspector Mohan Rao, spoke to ANI over the phone and said, “An FIR has been registered under sections 67 ITA Act 2008 (Punishment for publishing or transmitting obscene material in electronic form), 506 IPC (Punishment for criminal intimidation) and 509 IPC (Word, gesture or act intended to insult the modesty of a woman).”

Meera Chopra took to Twitter and attached the screenshot of the abusive Tweets she received. She mentioned that she has filed a FIR. “@ysjagan @tanetivanita I’ve been abused of gangrape, acid attack, abused, cyberbullied and slut-shamed by your state. @hydcitypolice has filed a fir and I hope for the safety of women this will be investigated thoroughly”, She tweeted. 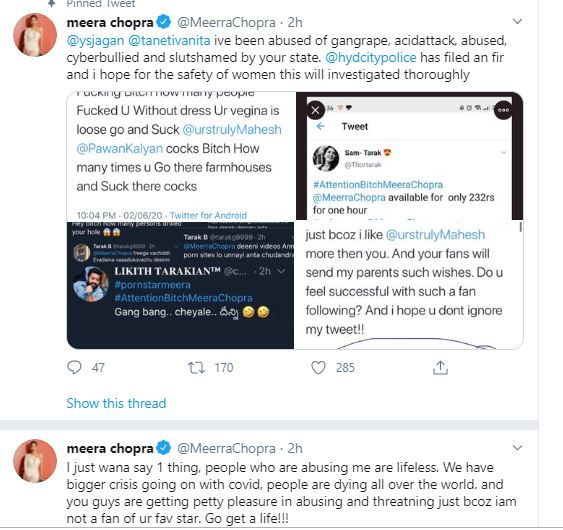 Meera further tweeted, “I just wana say 1 thing, people who are abusing me are lifeless. We have bigger crisis going on with covid, people are dying all over the world. and you guys are getting petty pleasure in abusing and threatning just bcoz iam not a fan of ur fav star. Go get a life!!!”