Pushpa Hindi Box Office Collection: Ever since Allu Arjun’s latest film Pushpa went on floors, the film has been making all the right noises. The movie has been grabbing the headlines for one reason or the other. Pushpa: The Rise has been included in the list of most successful South Indian films in the last few years. It was released in theaters on December 17 and entered the fourth week with tremendous numbers. The film’s collections once again saw a jump in the fourth weekend. It is already a smash hit, showing no signs of slowing down and is raking in big bucks. After 1.95 cr nett on 4th Friday, It had made 2.56 crores on the 23rd day, that is on Saturday and 3.48 cr on Sunday, which makes the total collection of the film 80.48 crores in Hindi. In the fourth weekend, Pushpa has made a great worldwide collection of about Rs 325 crores and the Hindi version’s net collection has crossed 80 crores.

Last week, the film was released on the OTT platform in Telugu, Tamil, Malayalam, and Kannada languages and gained a lot of social media interest. Pushpa – The Rise was released in theaters on 17 December and entered the fourth week on 7 January. The film’s collections once again saw a jump in the fourth weekend.

🔥 “Bunny is very popular among the Hindi audience. His popularity fetched the film this kind of market.” 🔥#PushpaHindi #AlluArjun

While the net collection of Pushpa Hindi in 25 days has been 80.48 crores.

Pushpa has also emerged as the biggest opener for Allu Arjun in India with the Hindi version of the film raking in Rs 12 crore in its opening weekend. Also starring Rashmika Mandanna and Fahadh Faasil, Pushpa: The Rise is currently streaming on Amazon Prime Video.

Rakul Preet Singh took to social media to appreciate the makers and actors of Pushpa. 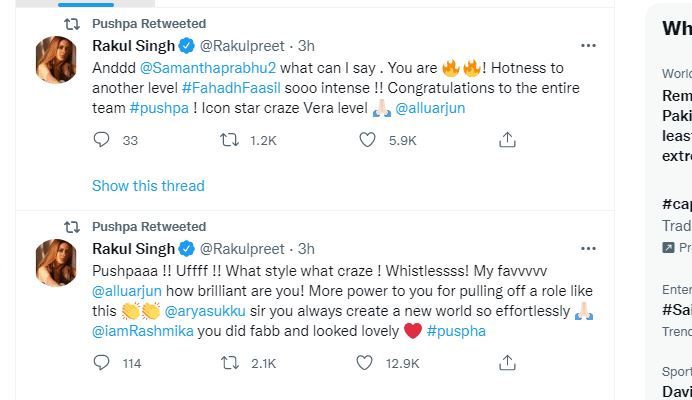