This comes days after the shooting of the Rajinikanth-starrer, 'Annaatthe', was halted after four of the film crew tested postive for COVID-19.

New Delhi: Superstar Rajinikanth was rushed to Apollo Hospitals in Hyderabad on Friday following severe fluctuations in blood pressure. In a statement, the Apollo Hospitals said that apart from fluctuating blood pressure and exhaustion “he did not have any other symptoms and is hemodynamically stable”. Also Read - From Covid Fight To Rajinikanth's Appeal To His Fans: Top News Headlines From Tamil Nadu

“Though he did not have any symptoms of Covid-19, his Blood Pressure showed severe fluctuations and needed further evaluation for which he has been admitted to the hospital. He will be investigated and monitored closely in the hospital till his blood pressure settles down before being discharged”, the statement read. Also Read - Rajinikanth To Resume Shooting of Annaatthe in February Next Year in Chennai Following His Health Conditions 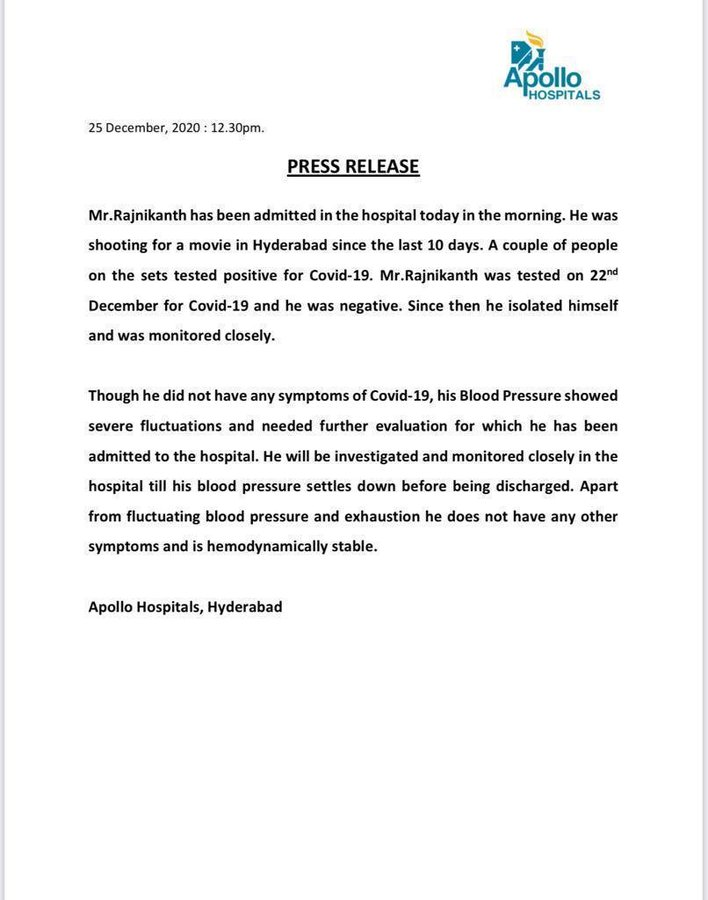 This comes days after the shooting of the Rajinikanth-starrer, ‘Annaatthe’, was halted after four of the film crew tested positive for COVID-19. However, the top actor and other crew members had tested negative for the virus.

The shoot for the movie, stalled due to the pandemic, resumed at Hyderbad only on December 14.  It was not immediately clear if the actor would stay put in the Telangana capital or return to Chennai.