It’s Raksha Bandhan, and actor Alia Bhatt took out time to celebrate the occasion by tieing a rakhi on the tiny wrist of filmmaker Karan Johar‘s son Yash. Earlier today, she took to Instagram stories to share an adorable picture tieing the Rakhi on Yash’s wrist. Dressed in white ethnic wear teamed up with jhumkas and wide smile, the photo is the proof of the cute bond Yash and Alia share. In the photo, Yash and Roohi can be seen twinning in a red shirt and white lowers. Also Read - Alia Bhatt Uses BTS' Butter As She Shares Her First Instagram Reel, Leaves Indian ARMY In Complete Awe

Take a look at the picture here: 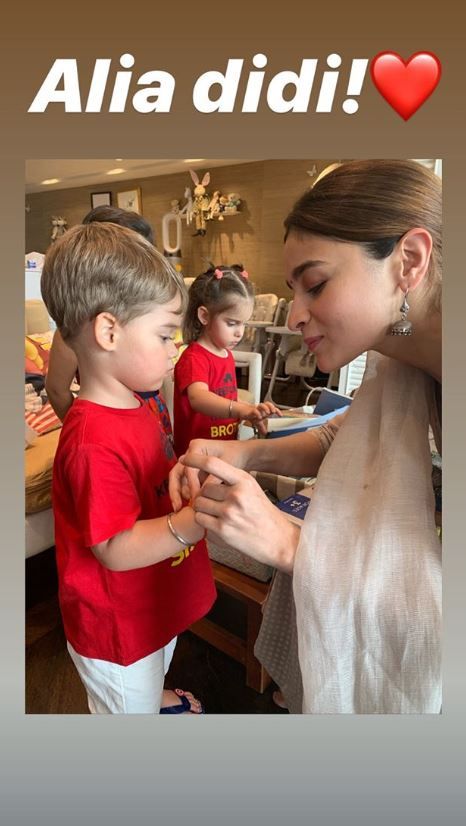 Karan had launched Alia’s Bollywood career with his 2012 film Student Of The Year, following which the actor features in almost every production of the filmmaker. While Karan Johar openly mentors Alia and her career, the two have often addressed each other as father and daughter.

Meanwhile, Alia has been featured in her first music video titled ‘Prada’. Newbie Shreya Sharma has lent voice along with The Doorbeen where Alia is seen grooving to the beats. As per Mid-day, The Doorbeen boys Omkar and Baba said, “Prada is our labour of love. It was a lot of fun, shooting with Alia. Her energy is infectious and she is amazingly talented. We are such huge fans of her, and when she agreed to star in our video we knew that expectations from fans will be sky-high. We hope that we do not let them down.”

On the work front, Alia is busy with Sadak 2, which marks the return of her father Mahesh Bhatt as director. The film is a sequel of the 1991 hit Sadak. The film is slated to release on July 10, 2020. She will also be seen in multi-starrer film Takht. The film also stars Anil Kapoor, Kareena Kapoor Khan, Ranveer Singh, Janhvi Kapoor, Vicky Kaushal and Bhumi Pednekar in pivotal roles. Making her debut in Tollywood, Alia will soon begin shooting for RRR helmed by SS Rajamouli that stars Ram Charan and Jr NTR.