Actor Sonam Kapoor, Arjun Kapoor, Rhea Kapoor, Harshvardhan Kapoor and other Kapoor siblings had a big reunion on the day of Raksha Bandhan. The big Kapoor cousin’s gang reunited to celebrate the day of Raksha Bandhan and their picture from the celebrations are making rounds on social media. India’s Most Wanted actor took to Instagram to share a series of photos where he gets clicked with all his sisters and pictures will definitely bring a big smile on your face. Also Read - Sonam Kapoor On Sexism In Bollywood, 'Each One Of Us Needs To Make Better Choices, Or We Will Be Subjected To A Witch-Hunt'

Sonam Kapoor too shared a collage of the celebrations on her Instagram stories.  Anshula Kapoor also shared a series of pictures and captioned it as, “Happy Rakhi #FamJam #BlessedWithTheBest missed you @janhvikapoor @khushi05k @akshaymarwah22 @harshvarrdhankapoor @aashitarelan16 @shanayakapoor02 @jahaankapoor26. (sic)” 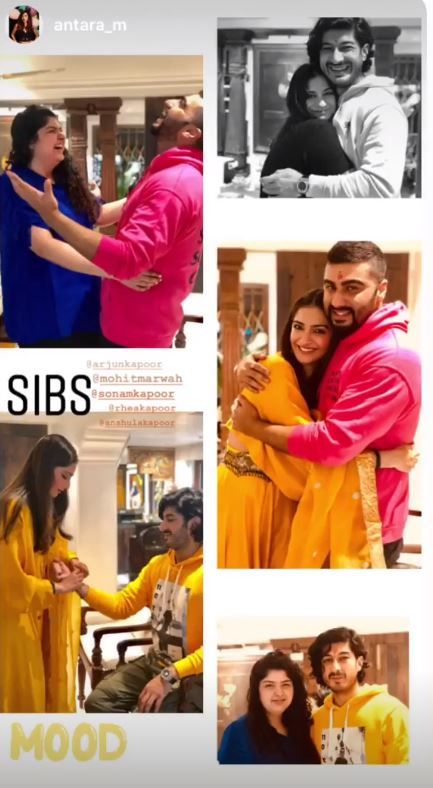 Even Mohit Marwa, son of Boney Kapoor and Anil Kapoor’s sister Reena, joined the celebration along with Sonam’s husband Anand Ahuja and Mohit’s wife Antara. However, Boney Kapoor’s daughters Janhvi Kapoor and Khushi Kapoor were missing from the Rakhi celebrations.

Anil Kapoor too shared a photo of her three children together, Sonam, Rhea and Harshvardhan and captioned it as, “Good to have a full house again after so long! It took Rakhi to bring them all back together, but so worth the wait! (sic)”

Good to have a full house again after so long! It took Rakhi to bring them all back together, but so worth the wait! ❤️

Meanwhile, Sonam Kapoor will be next seen in The Zoya Factor with Dulquer Salmaan which is based on a famous novel by Anuja Chauhan. Directed by Abhishek Sharma, the film which was supposed to release on June 14, 2019, will now hit theatres on September 20.

On the other hand, Arjun Kapoor is gearing up for his next big release, Panipat, a historical drama directed by Ashutosh Gowariker. The film also stars Kriti Sanon and Sanjay Dutt.