Much like the year gone by, we have seen many Bollywood films being pushed around at the start of 2018 to adjust their dates at the Box Office. Well, this could be due to many reasons —- to avoid clash at the BO, or due to unfinished post production work. Given that there have been so many changes as far as the release dates of the films are concerned, we are here to give you the final and confirmed list of nearly 10 films and their official release dates now ie at the beginning of this year. So make sure you sit with a pen and circle the dates in your movie calendar. Also Read - Uttarakhand Glacier Burst: 26 Bodies Recovered, 197 People Missing; Search Underway

It all began with Padmaavat (initially known as Padmavati), being pushed from its earlier date December 1, 2017 to January 25, 2018. Well, while the release of the film was postponed last year, the CBFC declared the new release date only at the start of the year. The Deepika Padukone–Shahid Kapoor–Ranveer Singh starrer film is now releasing along with Akshay Kumar‘s (AK) Padman. Initially, Rajinikanth-Akshay starrer 2.0, one of the most anticipated films of the year was to release on this date, but on account of averting two AK films from battling out at the BO, 2.0 has been pushed to April 14, 2018. Furthermore, there were rumours of the film’s post production not being complete, which according to sources could have resulted in the dates being pushed. The film is now releasing alongside Varun Dhawan and Shoojit Sarkar’s October. Sidharth Malhotra and Manoj Bajpayee‘s Aiyaary, which was to release on January 25 this year got pushed to February 9 this year in order to avert clash with Padmaavat. On the other hand, Anushka Sharma starrer Pari that was supposed to hit screens on February 9 eventually got pushed to March 2, 2018 in order to have a Holi release to capitalise on the weekend. Also Read - Kedarnath 2? Glacial Burst in Uttarakhand's Chamoli Grim Reminder of 2013 Deluge

Anyway, take a look at a detailed table given below for your kind perusal: Also Read - 9 Hit Films Sushant Singh Rajput Rejected in His Career, 5th One is Surprising 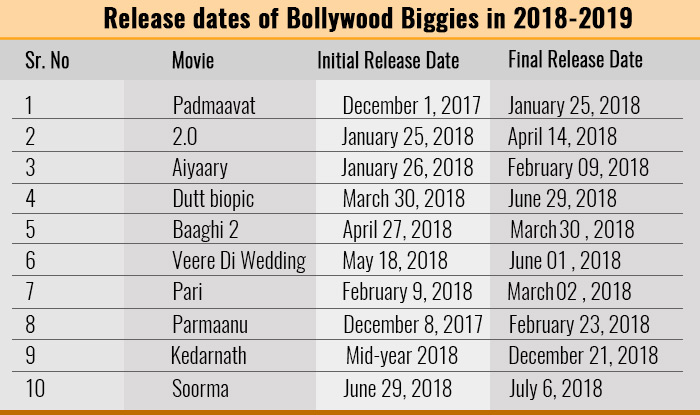 Recently, it was announced that Kareena Kapoor’s come back film post her pregnancy, titled Veere Di Wedding, which was to earlier release on May 18, 2018 will now release on June 1, 2018. The reasons for the date being pushed were however not cited by the makers. On the other hand, Ranbir Kapoor’s Sanjay Dutt biopic, which again is one of the most awaited film of the year (thanks to the star’s phenomenal physical transformation to look like the Khalnaayak actor) has been pushed to June 29 from its previous release date, which was March 20, 2018. Tiger Shroff-Disha Patani starrer Baaghi 2 will now release on March 30, from its earlier date of April 27. Likewise, Diljit Dosanjh’s Soorma that was to earlier hit screens on June 29 this year, got postponed to July 6 in order to avoid clashing with Ranbir’s Sanjay Dutt biopic. Hope you now have all the revise dates marked in your calendars to avoid the confusion.