Ranveer Singh – Deepika Padukone First Wedding Pictures Out! Get Over 1.9 Million Likes Within Minutes; Alia Bhatt, KRK And Other Celebs Extend Their Wishes to The Newlyweds

The duo got married twice as per Konkani and Sindhi traditions and have finally become man and wife. While Deepika looked radiant as a Punjabi bride in red and gold, Ranveer too co-ordinated well and looked dapper.

After keeping their fans waiting for like eternity, Deepika Padukone and Ranveer Singh have finally released pictures of the wedding. Both Deepika and Ranveer shared pictures of the wedding on their Instagram with a heart emoticon. The duo exchanged vows as per Konkani and Sindhi traditions and have finally become man and wife. While Deepika looked radiant as a Punjabi bride in red and gold, Ranveer too co-ordinated well and looked dapper. Also Read - Entertainment News Today, March 31: No Deepika Padukone And Hrithik Roshan in Nitesh Tiwari's Ramayana

The couple had taken the no-photos policy a bit too seriously and thus had not released any official picture until now. DeepVeer wedding is trending on social media and had fans requesting the couple to share their official pictures. There was one more person who was eagerly waiting to see first pictures of newlyweds and was none other than Union Minister Smriti Irani. Well now, the Union Minister too can have a look at the pictures released. (Also Read: Ranveer And Deepika’s First Wedding Pictures Are Finally Here And we Just Can’t Keep Calm) Also Read - Deepika Padukone Organizes Pulses, Labels Lentil Boxes in Her Kitchen on Day 6 of COVID-19 Lockdown

Take a look at the first photo of the couple and see how fans are reacting to the photos. Also Read - Deepika Padukone Shares Katrina Kaif's Video of Washing Dishes, Says 'She Stole my Idea' 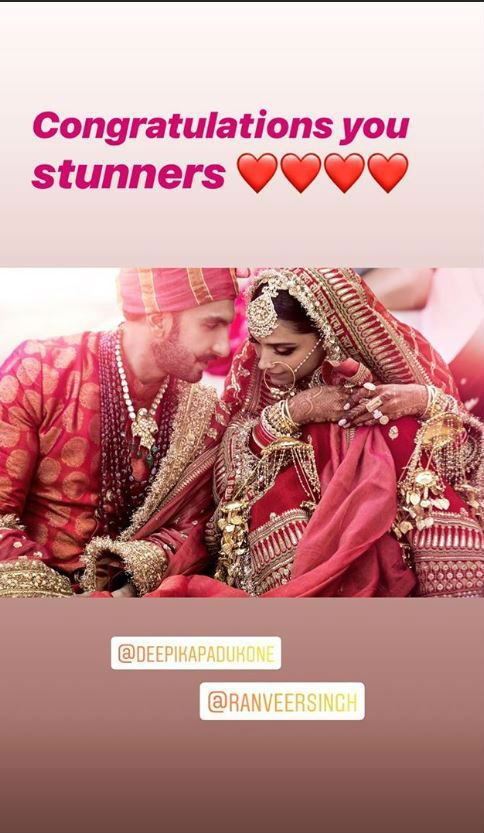 They are the best couple in the history of Bollywood and they won’t leave each other till their last breath. Congratulations to both of them. pic.twitter.com/D6YubyOGW8

AAAAAAA
MY OTP
THIS IS GORGEOUS
I WANT TO CRY#DeepVeer pic.twitter.com/3xgfzeVvr6

Is he apologizing for playing Tune Maari Entriyan at the wedding? #DeepVeer pic.twitter.com/5fTbQ86rCC

so this is how being in love looks like huh #Deepveer pic.twitter.com/aCfEwkEoBQ

The duo exchanged the wedding vows at Lake Como in Italy with their families and close friends in attendance. The grand reception is expected to take place on November 28 in Mumbai.

Both the stars shared the screen space in films like Goliyon Ki Rasleela Ram-Leela, Bajirao Mastani, and Padmaavat. On the professional front, Ranveer will next be seen in Rohit Shetty’s Simmba. The film is all set to hit the screens on December 28. On the other hand, Deepika will soon start shooting for Meghna Gulzar’s movie.