Ranveer Singh Will Make You go ‘Aww’ With His Declaration of Love For Deepika Padukone; Watch Video

Deepika and Ranveer will be hosting two more parties for their friends and family.

The party never ends when it involves actor Ranveer Singh, at least that is what it looked like from the videos that have emerged from the after marriage party that was thrown for him and his wife Deepika Padukone by none other than his sister Ritika Bhavnani. Apart from the crazy dance steps he was performing, Ranveer also declared his love for Deepika by saying he married the most beautiful girl in the world.Also Read - Ranveer Singh Starrer 83 Gets a Release Date | Watch Teaser

Some of the videos that had been taken at the party and shared on social media showed Ranveer taking to the dance floor with Deepika. But before all the fun began, Ranveer gave a speech, and welcomed his lady love to the podium by saying, “Ladies and gentlemen, I married the most beautiful girl in the world.” Also Read - Ranveer Singh-Alia Bhatt Tap Their Feet To ‘Brown Munde’ At AP Dhillon’s Concert In Gurugram | Watch

Ranveer went to speak about how lovely Deepika looked and then addressed his own outfit, “I would also like to introduce you to my pussy cat. He’s going to be making eyes at you throughout the evening, sitting on my right shoulder.” The cat in question appeared to be some sort of stuffed animal attached to his outfit with a neon light shining from it. Also Read - Alia Vs Deepika: Who Will Be Sanjay Leela Bhansali's New Heroine For BAIJU BAWRA ? | Checkout Video To Find Out

He concluded the speech by welcoming the guests and saying, “It is going to be an epic night, tonight, because all our lovers and friends are together under one roof. It will be an epic future baby, you and me.” 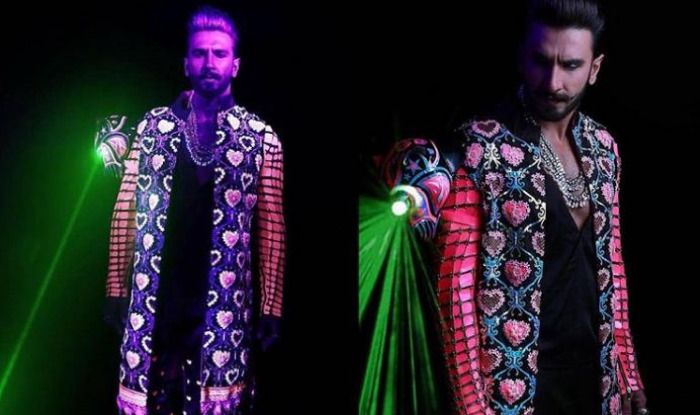 For the party, Deepika was dressed in a lehenga from Sabyasachi’s Kesribai Pannalal collection while Ranveer wore what looked like a glow-in-the-dark ensemble by designer Manish Arora.