Bagging almost all the hot-shot trophies for his remarkable performance in Zoya Akhtar’s Gully Boy last year, Bollywood hunk Ranveer Singh continues to grab accolades with the latest being the Best Actor in a Leading Role trophy at Zee Cine Awards. not only this, Ranveer even added the Song of the Year trophy and another for the Best On-screen Pair to his kitty of success and Deepika Padukone was left smitten. Also Read - Deepika Padukone Flaunts Her Adorable Smile as She Enjoys Good Meal And Company in THIS Childhood Picture

Taking to his Instagram handle, Ranveer beamed as he flaunted his loot and fans broke the Internet over the viral picture. Ranveer captioned it, “Best Actor in a Leading Role Song of the Year Best On-screen Pair #zeecineawards Blessings on Blessings on Blessings (sic).” Garnering 1.5 million likes on the picture instantly, Ranveer’s joy would surely have doubled as Deepika left a mushy comment for him. It read, “Hi, Your soo handsome…. Okay Bye… (sic).” Also Read - Deepika Padukone's Masterchef Skills Makes Ishaan Khatter Spill The Beans on His Next 'Quarantine Goal' 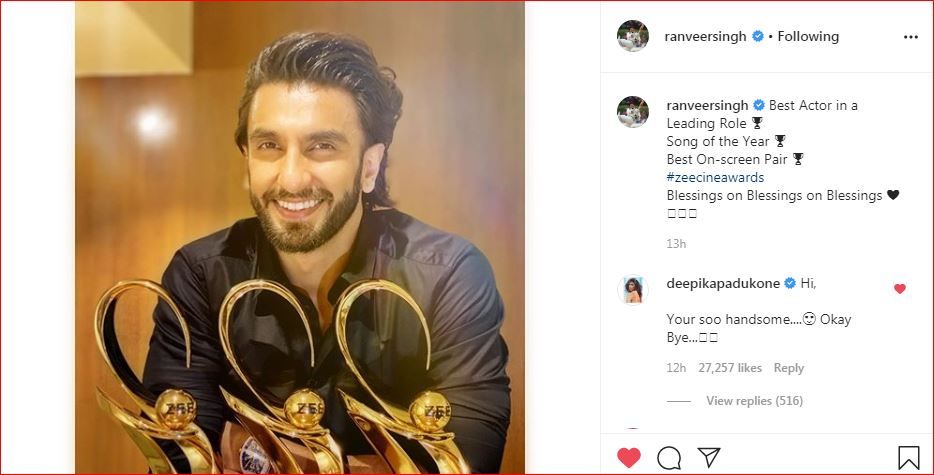 On the professional front, Ranveer is gearing up for Kabir Khan’s ’83, which traces India’s historic victory at the 1983 cricket World Cup. While Ranveer portrays the team’s captain Kapil Dev, Deepika plays his wife Romi. The film is presented by Reliance Entertainment and is scheduled to release on April 10 next year in Hindi, Tamil and Telugu.

Ranveer also has director-writer Divyang Thakkar’s Jayeshbbhai Jordaar. Ranveer plays the titular character while the story is set in Gujarat.