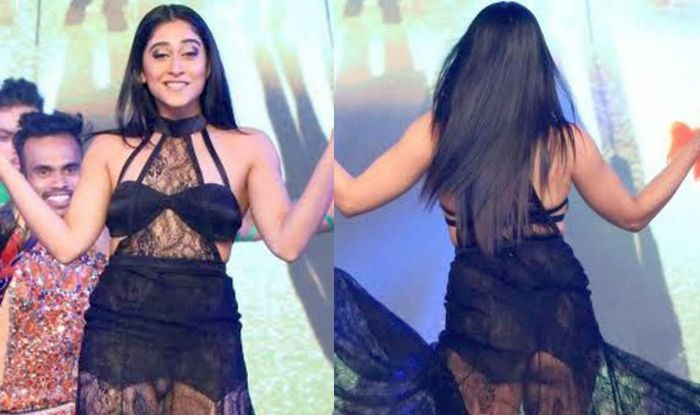 South Indian actress Regina Cassandra, who makes her Bollywood debut with the Amitabh Bachchan starrer Aankhen 2 (Aankhein 2), was in a for a rude shock at the launch event of the film in Mumbai. On the big Bollywood stage, Regina Cassandra had to face an embarrassing wardrobe malfunction! The actress opened up to Mumbai Mirror post the incident, terming the wardrobe malfunction as a “terrible mishap”. She told the tabloid, “I definitely didn’t want my debut to unfold in this way. It was a terrible mishap. I got off the stage with ‘OMG! What just happened?’ The entire team was extremely supportive and I told myself ‘It’s okay’ and have moved on.” What exactly happened with Regina Cassandra? Also Read - Amitabh Bachchan Shares And Thanks Amul For Dedicating ‘AB Beats C’ Doodle: Thank You For Continuously Thinking Of Me

Regina Cassandra was performing on stage at the launch event of Aankhen 2 wearing a sheer black gown and a leotard. While dancing, when she had her back to the audience and the cameras, Regina Cassandra’s gown flew up and revealed a little bit of her butt. The shutterbugs and television crews, of course, had a field day at the cost of Regina Cassandra’s embarrassment. Well, this may not have been considered a wardrobe malfunction if Regina Cassandra were wearing a bikini. But since she was in a full-length dress although see-through, this mishap has been termed as wardrobe malfunction. Also, a search on YouTube reveals that this is not the first time Regina Cassandra has had a wardrobe mishap! Also Read - Amitabh Bachchan Feels 'Heartening' After 'Mukti' From Coronavirus, 'Feels Bad' For Hospitalised Abhishek Bachchan

Take a look at Regina Cassandra’s pictures and video and tell us if it really is a wardrobe malfunction!

Aankhen 2 is directed by Anees Bazmee and also stars Anil Kapoor, Arjun Rampal, Arshad Warsi and Ileana D’Cruz. There will also be two more stars, one of whom is being touted a mystery man, who will join the cast of Aankhen 2. The first part, Aankhen, starred Amitabh Bachchan, Arjun Rampal, Paresh Rawal and Akshay Kumar, who rob a bank as blind men. Aankhen 2 will be a casino heist movie.