Madhuri Dixit, Rakesh Roshan, Jeetendra, Madhu Chopra and Rekha among others attended a wedding reception in Mumbai on Monday evening. Rikku Rakesh Nath, who was one of the most sought-after star managers in the industry during the ’90s, hosted a wedding reception for his daughter in the city. The party was attended by many prominent names from the film industry but Rekha outshined them all. Also Read - Sara Ali Khan Turns Bride For Designer Duo Abu Jani-Sandeep Khosla, Looks Stunning in Her Pink-Red Lehenga

The veteran actor had the company of her sister Radha at the party. For the function, Rekha recycled her orange-pink Manish Malhotra lehenga in her own quintessential dramatic fashion. The actor first wore the lehenga at the star-studded wedding of industrialist Mukesh Ambani‘s daughter – Isha Ambani, last year. Rekha repeated the same outfit to the wedding reception of Rikku’s daughter on Monday and looked fabulous in her bright lehenga. Check out these pictures: Also Read - Trending News Today February 02, 2020: Kareena Kapoor Khan-Kartik Aaryan Look Straight Out of Dream as They Turn Showstoppers For Manish Malhotra 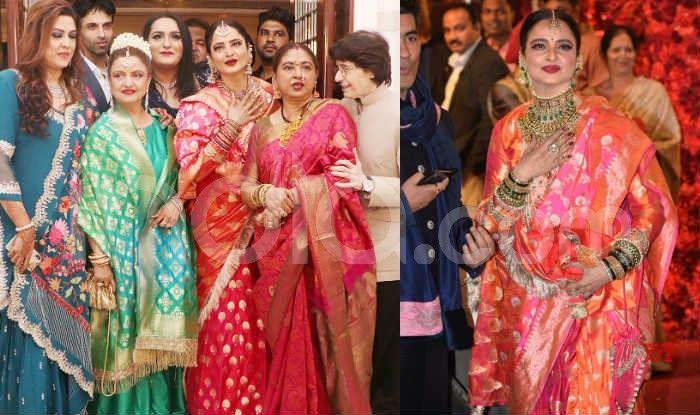 The veteran diva is known to go over the top with her styling like no one else in the industry. Her signature styling includes an outfit (usually a saree) in the brightest shades of red, pink, golden, orange and green, heavy statement neckpieces worn together, a maang-tikaa, stack of bangles that are worn up till the elbow, a gajra in hair or middle-parted hair kept open, sindoor, kohl-ed eyes and the most striking tone of red lipstick. Rekha went with the same styling this time as well and looked like the superstar that she is. Also Read - Rekha Aces ‘Dhoptungi’ Dialogue From Gully Boy And Salman Khan is Amazed- WATCH

It’s quite surreal to see a top star like Rekha recycling her wardrobe. That’s a practice that most stars should follow considering the dent in the pocket that these dresses cause anyway. We have seen Akshay Kumar, Twinkle Khanna, Mallika Sherawat, Janhvi Kapoor, Sara Ali Khan, Deepika Padukone, Malaika Arora, Kangana Ranaut and Sonam Kapoor repeating their outfits often. In fact, the Duchess of Cambridge, Kate Middleton, is the biggest celebrity who has set the benchmark of repeating expensive outfits from her wardrobe at various official tours. Glad to see Rekha doing it so beautifully back home! What do you think?