Ajaz has now landed into trouble, as he has been accused of sending vulgar sexual messages on WhatsApp to model and actress Aishwarya Choubey.

Bigg Boss 7 contestant Ajaz Khan has been in the news for his controversies. The actor has yet again made headlines for all the wrong reasons. Ajaz has now landed into trouble, as he has been accused of sending vulgar sexual messages on WhatsApp to model and actress Aishwarya Choubey. The actor has been booked by the Versova Police in Mumbai on Monday for allegedly sending vulgar messages to the model and Mumbai Police has also filed an FIR against the actor on Tuesday. Ajaz has been booked under Indian Penal Code (IPC) Section 504 and 509. Aishwarya has also alleged that Ajaz has been harassing her by sending improper photographs. ALSO READ: Bigg Boss contestant Ajaz Khan sends vulgar messages to model, booked by police Also Read - Rhea Chakraborty in Bigg Boss: TV Actor Says Her Entry in House Can Clear Confusion About SSR

Ajaz was quoted by The Indian Express as saying, “I am really saddened. I am being made into a punching bag. I met this girl at a party through an actor friend Javed Rizvi (who was in the film Lakeer Ka Fakeer with me). That’s it. I have nothing more to do with her. If this is the way one gets repaid for being kind to a stranger then I would advise all actors to not even say hello to newcomers out of kindness,” he added. ALSO READ: Pratyusha Banerjee suicide case: Actor Ajaz Khan claims TV actress’s death was planned murder Also Read - Bigg Boss 14: Paras Chhabra Comments on Pavitra Punia's Chemistry With Eijaz Khan, Says 'I Pray For Eijaz Bhai'

Aishwarya was quoted by Hindustan Times as saying that she met Ajaz in April this year. “I know Ajaz is not a star but neither am I a big name. When I came to Mumbai, a friend told me that he (Ajaz) is a good person and advised me to stay in touch, as he could suggest some work for me. I would have never stayed in touch had I not thought we were friends,” she said. Also Read - Bigg Boss 14: Hina Khan Impresses Fashion Police With Her Refreshing Look in Blue Tunic And Matching Printed Pants, See PHOTOS

The former Bigg Boss contestant told Hindustan Times, “I only met her three or four times at parties. Thank God, I never met her alone. This is her publicity stunt and it is not the first time she has done it. Earlier, she claimed that Salman Khan was dating her and that she was all set to play the lead in one of his upcoming films. No one reported it then because they were scared of Salman’s lawyers. But who cares for Ajaz Khan?”

He added, “She reportedly approached the police on Monday night. If the police found her complaint valid, they would have approached me or arrested me. I haven’t received any communication from the Versova Police Station.”

Aishwarya further said, “When he first sent me vulgar pictures, I just deleted them, as I stay with family. I told him that I do not want anything physical and was only interested in pure friendship.” 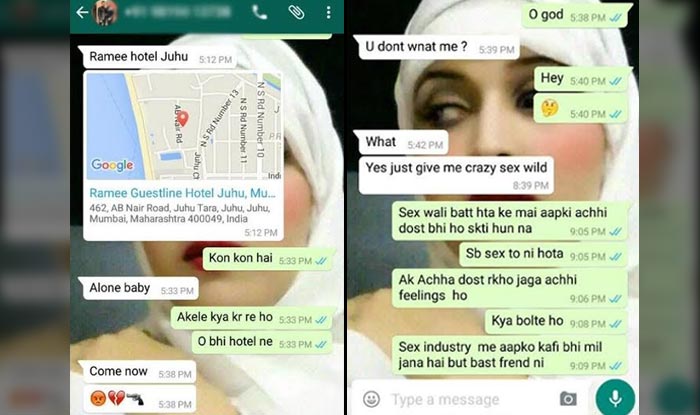 In the eight-minute long telephonic conversation shared above by Aishwarya, Ajaz kept on saying that he has always helped her, but on the other side Aishwarya kept on insisting him that she always trusted him as her best friend.

Ajaz kept saying in the phone call, “Tumhara kabhi kuch nahi hoga“. Ajaz also threatened her and reminded her that he was the one who introduced her to ‘Ramu’ – filmmaker Ram Gopal Varma and also said that all this was just a publicity stunt and nothing else. Cops have filed a complaint against the actor, but he has not been arrested yet.