Rhea Kapoor and Sonam Kapoor slammed Instagram for not allowing them to remove a 'death threat' comment.

Sonam Kapoor’s sister Rhea Kapoor has been threatened with awful statements in an Instagram comment, written on her post. She has come across death threat which reads as ‘kutte ki maut maregi ek din’ which she makes it a point to report to Instagram. However, the platform doesn’t find those filthy comments breaking their security or privacy guidelines. Rhea Kapoor and Sonam Kapoor took to their respective accounts to school Instagram by sharing screenshots of comments and what message Rhea gets when she tries to remove the comment.Also Read - Instagram Testing THIS New Feature For Stories In Its App

The response from Instagram read, “We found that this comment likely doesn’t go against our Community guidelines. If you think we did a mistake, please report again.” To which Rhea wrote, “Instagram, seriously?? Now let’s have a look at the comment. This has happened multiple times,” ” Of course, I will block this individual but are you doing your part go keep this ‘community’ safe? Tap to see the comment.” Also Read - Sunny Leone Plays With Sharks, Poses With Them in Dangerously Stunning Pics From Maldives

Take a look at the screenshots here: 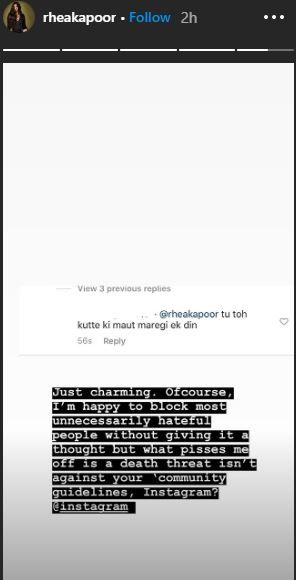 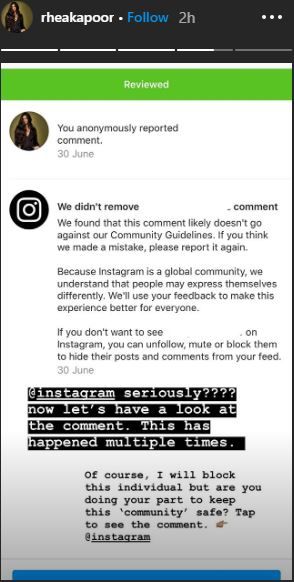 Sonam Kapoor has been troll’s most favourite target on Twitter and Instagram. She came under the receiving end of hatred and criticism for being a star kid after Sushant Singh Rajput’s untimely death. Now, people are targeting Rhea Kapoor too.