Richa Chadda is a stunner on Verve cover!

The Masaan actor stuns us with her striking presence!

We like Richa Chadda, don’t we? The 27-year-old actress marked new milestones of her career in 2015 with her critically acclaimed film Masaan and and her different role in Main Aur Charles. The actress also went on to represent India Internationally when she was invited as a jury member at the Marrakech Film Festival, the panel was presided by Mr. Francais Coppola, the film-maker of ‘Godfather’. Richa Chadha has emerged from the off beat cinema to mainstream, after having established herself in Bollywood as a risk- taker by doing some really unconventional roles to presenting India on International platform.Also Read - Pune Police Uses Gangs of Wasseypur Meme to Warn People About Fraudsters Selling Fake Remdesivir 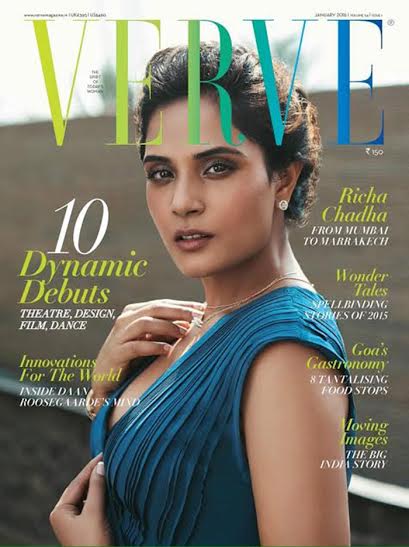 The self made actress has created a niche for herself in the industry by consistently delivering epic performances by portraying some of the most difficult roles. And now the actress has made it to the cover page of the very elite Verve Magazine. The actress looks stunning on the cover page. Her poised look can smitten anyone who looks at this visual. Blame it on her dusky skin, her interesting face with striking features and the way she looks into the lens makes Richa a complete package for this cover! Also Read - Here Are 7 Reasons Why You Should or Should Not Watch Panga