Richa Chadha and Ali Fazal are definitely going in for a mid-April wedding. The couple has applied for marriage registration in the Bandra family court. Read on.

Amid strong speculations of their April wedding this year, a marriage registration document of Richa Chadha and Ali Fazal has been released by leading news daily. The two actors have applied for marriage registration in the Bandra family court and the copy of the same application dated February 15 is out now. Released by Mid-Day, it clearly shows the two actors’ names, their photographs and the signatures agreeing for marriage registration. This means that the wedding is likely to take place after March 15 and therefore, the rumours around their mid-April wedding are likely to be true. Also Read - Richa Chadha and Ali Fazal Planning a Monsoon Wedding? Read Here to Know 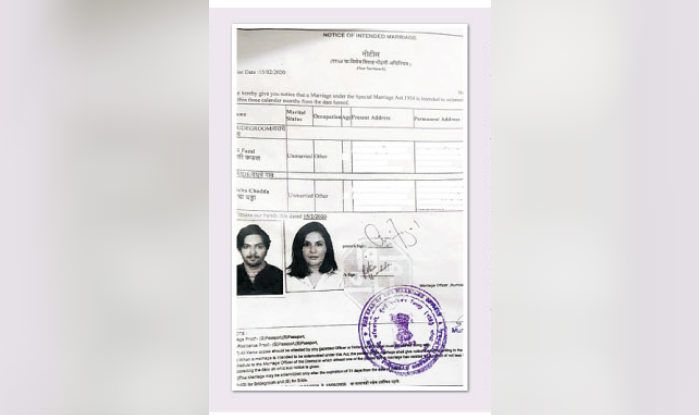 The report also quoted the actors’ official spokesperson confirming the news of the wedding. The daily quoted the official source saying both the sides of the families and other people involved are happy with the couple’s decision and celebrations are going to begin soon. The spokesperson added that the registration date has been taken and the couple has got a three-month window to get married from the date that has been allotted. Ali and Richa are trying to get the official registration in the last week of April. The spokesperson said, “The couple is working towards an official registration in the last week of April, post which the celebrations will follow. All we can say is that it’s a happy occasion, and all the parties involved are elated.” After their destination wedding in April, the couple will have a court wedding in the same month. Also Read - Richa Chadha Shares Glimpses of Her Role From Next Film, Title Remains a Mystery

Earlier, when the duo was asked to comment on the rumours of their wedding in April, both Ali and Richa steered clear away from shelling out any detail. They maintained that they will announce it officially when something is finalised. Guess the time is finally here now! Also Read - Richa Chadha on Inter-Religion Relationship With Ali Fazal: Don't Think Family Would Object if we Take it to Next Level