Diego Maradona’s Death: The greatest footballer of all time Diego Maradona passed away on Wednesday due to heart attack. He had undergone a surgery to remove a blood clot in his brain. The Argentine football legend was 60. Fans all over the world have paid tribute to Diego. Even Bollywood celebs such as Shah Rukh Khan, Ranveer Singh, Karisma Kapoor, Kareena Kapoor Khan, Arjun Kapoor have shared a post on their social media accounts to bid farewell to the legend footballer.Also Read - When Shah Rukh Khan Asked Zayed Khan ‘Do You Know How to Act?’, This Was His Reply

Shah Rukh Khan took to social media to pen a note on the demise of Diego Maradona. Sharing a photo of the legend, he wrote, “Diego Maradona….you made football even more beautiful. You will be sorely missed and may you entertain and enthral heaven as you did this world. RIP…. (sic).” Also Read - Viral Video: Filmy Bride Sits Atop Moving Car, Proposes to Groom in Shah Rukh Khan Style | Watch

Karishma Kapoor shared two old photos of her with Diego Maradona and wrote, “Had the honour of meeting this legend RiP #diegomaradona (sic).” In one of the photos, the football legend is seen kissing the actress’s hand.

Kareena Kapoor Khan also took to her Instagram story to pay tribute to Maradona. She shared a photo of the footballer and wrote, “Rest in power,” with a broken heart emoji. 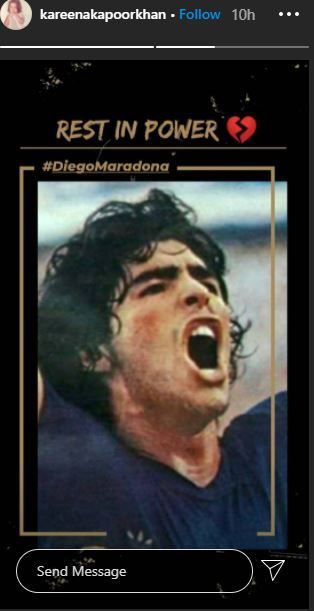 Thank you for the beauty. #DiegoMaradona Rest in peace. pic.twitter.com/AzdaCoRtW2 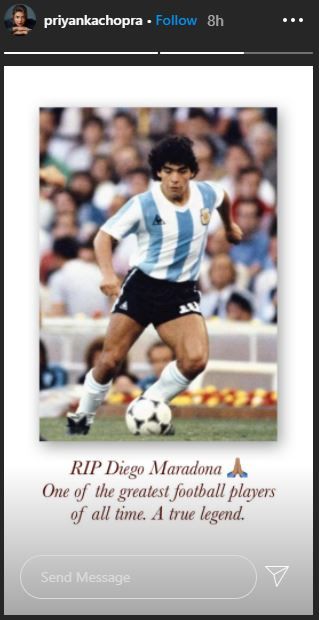 The footballing icon led the Argentinian football team to the 1986 World Cup triumph. Diego Maradona is famed for his ‘Goal of the century’ and hailed by many as the greatest ever. He was currently the coach of Argentine Primera Division club Gimnasia de La Plata. The legend was in charge of the team at the 2010 World Cup in South Africa before leaving at the end of the tournament. He coached Dubai-based club Al Wasl in the UAE Pro-League for the 2011–12 season.