Rishi Kapoor opens up about son Ranbir Kapoor and the Kapoor khaandan!

'Ranbir has got to make his own decisions. If I was in his place (to help in his choice of films), I would have never let him do a film like Barfi!' says Rishi Kapoor. 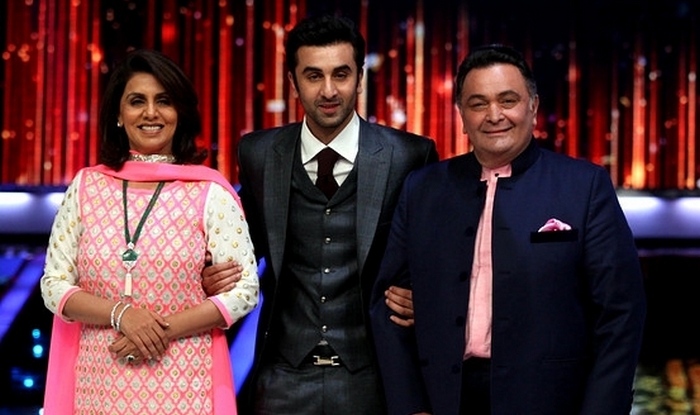 Bollywood actor Rishi Kapoor opened up about his superstar son Ranbir Kapoor and also shared anecdotes about the Kapoor khaandan, considered the first family of Indian cinema. Kapoor was in conversation with renowned journalist Shekhar Gupta for the show Off the Cuff for his property ThePrint. The chat was held in Delhi on June 23, 2016, and telecast on NDTV and YouTube. Also Read - Eid al-Adha 2020: From Shah Rukh Khan to Salman Khan, Celebrities Flood Internet With Eid Wishes

At the onset, Gupta began talking about Rishi Kapoor (@chintskap) being a prolific tweeter and so good at humour. “What makes you think I’m a good guy?” asks Kapoor to Gupta, setting the tone for the interview. Also Read - Anurag Kashyap Says His Brother Abhinav Kashyap Asked Him to 'Not Interfere in His Business'

“The media is all over you if you say something, so I have also come well prepared to speak to you,” he says to Shekhar Gupta. Using cricketing terms to explain the situation, he says, “You get caught behind on a no ball.”

Rishi Kapoor made no big deal of his popularity on Twitter, saying he tweets what he feels like or thinks. But he also revealed that he gets a “beating from my wife” for it, and also from some Twitter users.

So, right from tweeting about the beef ban controversy or making fun of actress Sonakshi Sinha via a meme (she didn’t mind it), to his recent tweet on the Zara sale where the clothing brand is seen selling fully torn tops and jeans, Rishi Kapoor just knows the pulse of the young people! (ALSO READ: Rishi Kapoor’s tweet to Twinkle Khanna: C’mon, nothing controversial about it, yaar)

Rishi Kapoor further reveals a very special thing he inherited from his fimmaker-actor father. He says that after giving him a break in Mera Naam Joker and Bobby, Raj Kapoor never assisted him in his career further. He used to tell people that he is not his son’s secretary and that his child is on his own. Rishi says he has continued with that for his star son Ranbir Kapoor.

“Ranbir has got to make his own decisions. If I was in his place (to help in his choice of films), I would have never let him do a film like Barfi! ‘Are you mad? Bol nahin sakta, sun nahin sakta, kaun dekhega picture?’ (I would’ve asked him.). I would’ve never let me do a film like Wake Up Sid, or Rockstar, or Rocket Singh…,” reveals Kapoor, agreeing that these films had some of his best roles.

“So we don’t bring our work home, we don’t discuss it. But I had advised Ranbir on how to sing while shooting for Rockstar because he called me and said the does not like to lip sync,” says Kapoor, sharing his wisdom.

Of dining table conversations of the Kapoor khandaan

“We never brought our work home,” he says, revealing an incident where he remembers his dad Raj Kapoor fighting with his mother Krishna over how many rotis should be made at home!

“Udta Punjab doesn’t concern me, but if censor laws are old-fashioned, they should be looked at. Since the 1952 Cinemotagraph Act is going on, the world has changed, and we are still going by the old norms!” said Kapoor.

Kapoor also spoke about Salman Khan’s rape remark. He was of the opinion that the Sultan actor did not mean it but that he shouldn’t have said it. (ALSO READ: Rishi Kapoor reacts to Salman Khan’s `raped woman’ remark & his reply will surprise you)

What do you think of this interview of Rishi Kapoor?