Late veteran actor Rishi Kapoor’s daughter Riddhima Kapoor has been sharing several old photos on her Instagram with her father ever since his demise. She now shared a photo from their family gathering when she gave birth to her daughter Samara during New Years. Sharing the photo on her Instagram story, she wrote, “Beautiful memories New Years eve 2010 – Just before Samara was born.” Also Read - Rishi Kapoor Choked After Informing me About Cancer Diagnosis, Reveals Raj Bansal

Have a look at the story here: 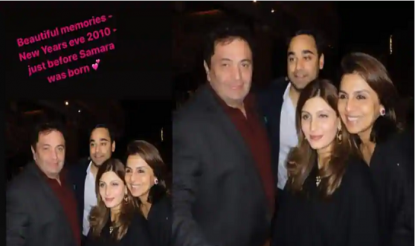 Riddhima had previously shared a photo of her father Rishi with his mother Krishna Raj and captioned it, “Reunited with his most favourite person”. She has also been sharing several pics from her childhood with him and from her parents from their family gatherings.

After Rishi’s demise, his wife Neetu Kapoor wrote a note thanking all the doctors and medical staff who took care of Rishi during his treatment. “As a family we have a deep sense of loss.. when we sit together and look back at the past few months what we also feel is immense gratitude – gratitude towards the doctors at HN reliance hospital! The whole team of doctors, brothers and nurses headed by Dr Tarang Gianchandani treated my husband like he was their own – they advised us like we were their own.. and for all that and more I thank them from the bottom of my heart,” wrote Neetu Kapoor.