Rithvik Dhanjani's cryptic Instagram posts on love, life and how 'nothing should go back to normal' add to the rumours of his breakup with Asha Negi.

Actor Rithvik Dhanjani made a strange post about love and how getting back to ‘normal’ is not an option anymore. In his Instagram stories, the actor made two posts and his fans were quick to relate it to the breakup rumours that have been going on for a while. It was reported last week that Rithvik and Asha Negi have ended their seven-year-long relationship. While there’s nothing official about the reports, Rithvik’s post now hints at things not being as happy as they were until last year when the duo was posting loved-up pictures on their Instagram accounts. Also Read - Asha Negi And Rithvik Dhanjani Break-up After Seven Years of Relationship That Began on The Sets of Pavitra Rishta 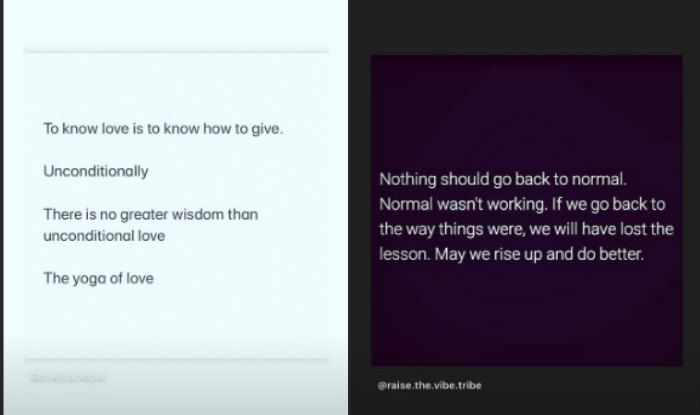 The posts in Rithvik’s Instagram stories talk about ‘unconditional love’ and the lessons love teaches us. One message reads, “To know love is to know how to give.
Unconditionally
There is no greater wisdom than unconditional love
The yoga of love” (sic) Also Read - Pavitra Rishta Star Asha Negi Opposite Abhishek Bachchan in Anurag Basu's Multi-Starrer

A report in Times of India earlier quoted a source close to the couple saying how things started messing up by the end of the last year. The Christmas party with their friends was the last celebration that Rithvik and Asha participated in together. That was also the last time when they posted happy selfies together on social media. It’s been nearly four months and they haven’t posted any new picture of themselves as a couple on social media, which is strange for a couple who never shied away from some public display of affection. It is believed that they have maintained a graceful distance and their friends are also respecting their decision.

Guess some things are just not meant to happen!