The naked Seinfeld actress depicts a tattoo of the US Constitution signed by John Hancock. 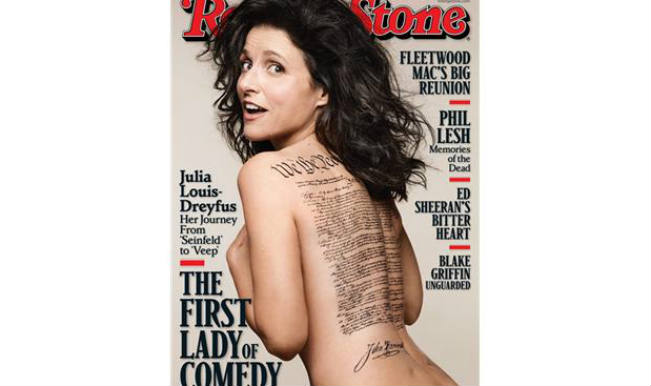 Los Angeles, April 10: The cover page of the May edition of Rolling Stone magazine’s US edition features American actress Julia Louis-Dreyfus, where the star depicts a tattoo of the US Constitution signed by John Hancock across her back. The truth is that Hancock signed the Declaration of Independence, not the Constitution. Also Read - BTS Becomes First All-Asian Act To Feature On The Cover of Rolling Stone Magazine

The National Constitution Center in Philadelphia mocked the error by tweeting a photo of the cover alongside founding fathers George Washington and Benjamin Franklin in Signers’ with the caption: “Thanks for the shoutout but no Hancock here.” Also Read - Shaggy to release first solo album in eight years

Rolling Stone spokeswoman Melissa Bruno said that the Declaration of Independence is on the other side of the actress’ body, and it couldn’t fit in the signatures.

Inside the magazine, another image shot by photographer Mark Seliger shows a man in a colonial wig tattooing Hancock’s signature above the Seinfeld actress’ bare bottom.

“I’m a perfectionist in my work. I think I might drive people nuts. I don’t ask them, because I don’t need that sh** on top of how I’m feeling,” said Louis-Dreyfus in the cover story of the magazine.