Rupert Grint: The man with an ice cream truck

The Harry Potter actor always had a dream to buy an ice cream truck. 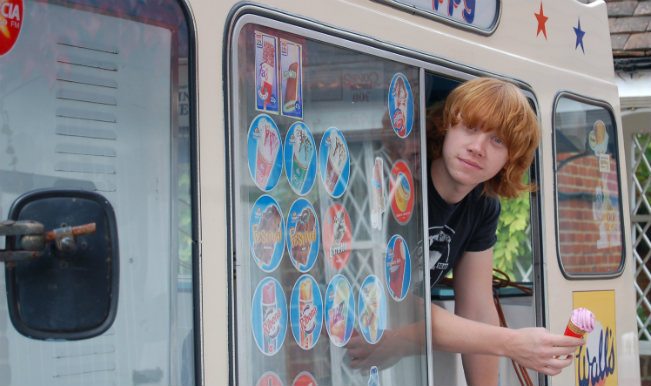 One of the most complicated and misunderstood things in life would be child actors. With the immense talent that they possess, comes the power of the money they make and their attitude towards it is what decides their life. While there are many inspiring stories showcasing the positive attributes of these actors’ life, one of the most inspirational stories is that of actor Rupert Grint – the red headed boy who played the role of Ron Weasley, Harry Potter’s best friend in the Harry Potter series! Also Read - Ice Cream Maker Kwality Ltd, Its Directors Booked by CBI in Rs 1,400 Crore Bank Fraud Case

At an interview for their first movie, Harry Potter and the Sorcerer’s Stone, the three lead actors Daniel Radcliffe, Emma Watson and Rupert Grint were asked what they planned to do with their money. While both Emma and Daniel replied with their plans of saving it or giving it to their parents, Rupert shared his childish desire of buying an ice cream truck. Also Read - Homophobia: Russian Politician Alerts President Putin Against Rainbow Ice Cream Allegedly Promoting Homosexuality, Matter to be Investigated

A long time after this interview, Grint fulfilled his wish. He bought himself a Mr. Whippy Ice Cream truck with his first big pay check. This is one of the few times, where a dream, no matter how bizarre is turned into a reality. Also Read - Wait, What? An Owl Apparently Dropped A Smartphone On Man’s Terrace in Bengaluru, Twitter Asks 'Hogwarts Coming to Life in 2020?

He’s known to travel around villages giving out sweets and ice creams to kids for free. Grint is finally living his dream of being an ice cream man!