Anupamaa: Vanraj Aka Sudhanshu Pandey is heartbroken as the show’s ardent fan passed away recently.

Mumbai: Anupamaa has been one of the most-watched TV shows on Television. The TRP report also says the same. There is sad news for all the casts and makers of Anupamaa as the show’s ardent fan passed away recently. Anupamaa’s Vanraj aka Sudhanshu Pandey is heartbroken to learn the demise of one of the fans. He took to social media to share the sad news and also shared a screenshot of the fan page named Rups Ki Diwani (anupama_spark). The Instagram account claimed to be a huge fan of Rupali Ganguly.Also Read - Anupama Turns Savage After Anuj Asks Her to be Confident: 'Na Main Namak...' | Anupamaa Written Update, June 22

The fan account also has creative edits of Sudhanshu Pandey, Madalsa Sharma and other casts. Pandey mourned the loss of a fan and offered his heartfelt condolences to the family. He wrote: “My heartfelt condolences to the family of @anupama_sparkale. We lost a loyal fan n her blessings” with heartbreak emojis. Also Read - Anupama-Anuj Kapadia's First Argument as Married Couple, #MaAn Fans Say 'Bhalai Isi Me Hai...'

Have a look at the message shared by Sudhanshu Pamdey here: 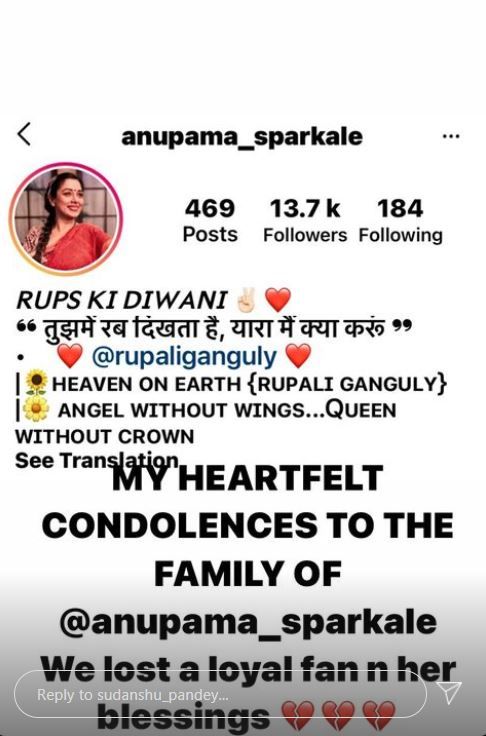 In the upcoming episode of Anupamaa, the audience will get to see Kavya and Anupamaa’s verbal fight. As they are living under the same roof, Kavya is insecure about her husband Vanraj. Kavya accused Anupamaa of eyeing her husband, she is now planning to divide the Shahs and create a rift among them. Fans will see an argument between Kinjal and Anupamaa after Kavya instigates her to speak that Kinjal has to manage all household work since Anupamaa started working. “Jab se Anupamaa job krne lagi hai, tabse saar bojh tumpr aa gya hai. Iss ghar ko Anupamaa 2 mil gye hai,” she said. This leaves Kinjal wondering if Kavya is right and she then denies making chappatis for Baa and Bapuji. This follows is an argument between Anupamaa and Kinjal. Also Read - Anupamaa’s Aneri Vajani Aka Mukku Reveals She is Dating Someone And He is Not Harsh Rajput

Watch this space for more updates on Anupamaa.