Filmmaker Sajid Khan who has been accused again recently for sexually harassing Indian Model and actor Paula at the age of 17, gets trolled badly on social media as the netizens ask for some serious action. #ArrestSajidKhan trends all over Twitter. Now, in a fresh interview Beyond Bollywood, Paula (Dimple Paul) has narrated the whole story exactly what all happened 10 years ago. The filmmaker invited Paula to his home after she won the beauty pageant. She narrated how Sajid Khan kept his hand on her legs and told her to give the reference of Jiah Khan that she was once in the same position as hers. Also Read - Sajid Khan Sexual Harassment Case: Model Paula Says She's Ready to File FIR in #MeToo on One Condition

Paula was quoted saying, “He came and sat next to me. He asked me if I have a boyfriend and whether I have had sex. I was nervous and didn’t really know what to say. He told me that it’s an altogether different thing to have sex with a man. He told me that if it wasn’t for him, I wouldn’t have won the pageant. He kept his hand on my leg and started rubbing it. He said something like you know Jiah Khan stood in the same place where I stand now.” Also Read - #ArrestSajidKhan Trends After Model Paula Accused Filmmaker of Sexual Harassment

Paula further claimed the portal that Sajid Khan took her to his bedroom, pulled her top and asked her to take it off. She revealed that she then stormed out of his house as she understood his intentions. When asked why did she open up ten years ago, Paula shared that her parents are no more and that she did not want more girls to get trapped. Jiah Khan had worked with Sajid Khan in the first Housefull that released in 2010. Also Read - Sajid Khan Told me to Strip to Get a Role in Housefull: Indian Model Paula Accuses Director of Sexual Harassment

🙏🏼 Before democracy dies and there is no freedom of speech anymore I thought I should speak ! 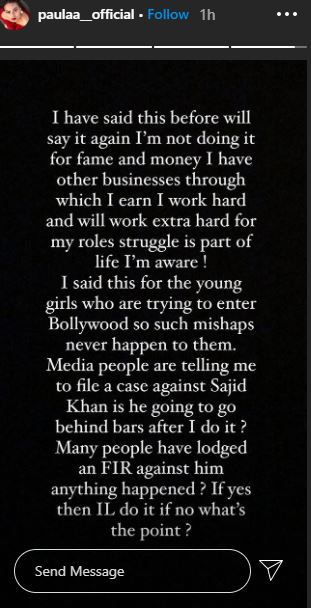 On Wednesday, Paula had taken to Instagram to reveal the sexual harassment by Sajid Khan. “Before democracy dies and there is no freedom of speech anymore I thought I should speak”, she captioned the post.