Mumbai: Thalapathy Vijay and Vijay Sethupathy’s monster-blockbuster Master broke all the records at the box office. Originally in Tamil, the Lokesh Kanagaraj directorial collected Rs 25 crore in the Tamil Nadu box office, with Rs 1.21 crore from Chennai theatres on day 1. As per India.com sources, the Vijay Sethupathy-starrer has collected Rs 263 crore worldwide and Rs 217 crore in India. This includes Rs 145. 5 crores from Tamil Nadu alone. There is good news for all the fans that Thalapathy Vijay and Vijay Sethupathi fronted Master is gearing up for a Hindi remake. A few days ago, Pinkvilla revealed that Kabir Singh producer, Murad Khetani and Endemol Shine will be together producing the Master Hindi remake and now, it has been reported that the makers have approached Bollywood’s megastar Salman Khan to play the role of JD Master, who is a college professor popular for his friendly approach towards students.Also Read - Shehnaaz Gill Writes Sidharth Shukla's Name First While Signing Autograph, SidNaaz Fans Get Emotional- Watch Video

A source close to the development said, “Murad and the team of Endemol have had a couple of meetings with Salman Khan over the last 30 days, to discuss Master with him. Salman has liked the concept of the film, and has shown keen interest, however, is waiting for the team of Master to come to him with a bound script in Hindi, as a lot of elements from the Tamil original have to be tweaked to suit the sensibilities of Bollywood audience”. Also Read - After Salman Khan, Swara Bhasker Receives Death Threat Letter, Actress Files Complaint, Mumbai Police Begins Probe

“Salman’s aura and personality suits best for the role of Master, and that’s exactly what the makers also felt. The discussions are in the very nascent stage, and Salman will take his decision on doing or not doing the film only after hearing the screenplay narration. The team of Master is currently working on the rewriting the script – tweaking the second half of the original, and editing the rather longer portions to keep the runtime in check in Hindi. The next narration with Salman is expected to take place in a couple of months,” the source added. Also Read - After Salman Khan, Bigg Boss Fame Manu Punjabi Receives Sidhu Moosewala-Type Death Threat

Twitter started the trend Salman with 21k tweets as there was a mix reaction on the report. Many imagined Salman Khan as JD Master and there were a few who do not want Salman to step into Thalapathy Vijay’s shoes. One of the users wrote: “Salman will not be able to act like vijay. if master remake happen than Disaster sure”. Another one said: “Disaster Hoga Pakka Vijay Jaisa Acting Nahi Kar Payega Bhai”.

I think #Salman Will Justify this Role!!

What do you think 🤔? 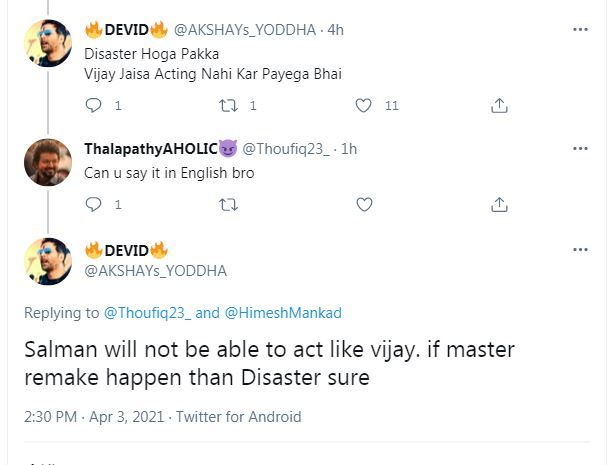 What are your thoughts on the same? Comment below.