Salman Khan in Mandi for Arpita Khan Sharma’s wedding reception: All you need to know!

Salman Khan has been invited as a 'state guest' by the Himachal Pradesh government. 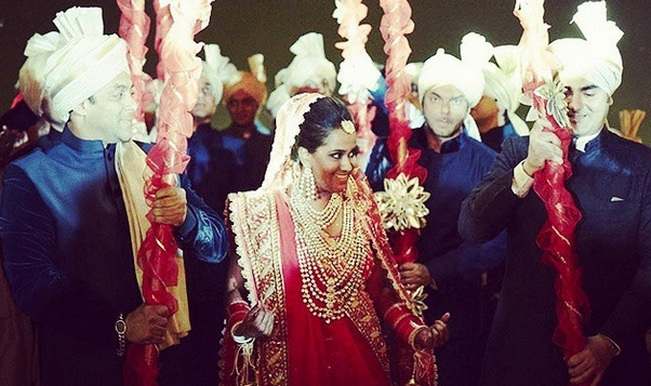 Right after returning from Kashmir after completing the shooting schedule of Bajrangi Bhaijaan, Salman Khan is in North India again. The Bollywood actor will be in Mandi, Himachal Pradesh, today (May 25) for the wedding reception of his adopted sister Arpita Khan Sharma. All eyes are on Arpita and Salman’s Twitter accounts for pictures from the ceremony in the groom’s hometown, where apparently 10,000 guests have been invited by the highly influential families. SEE: Salman Khan attends Arpita Khan Sharma’s wedding reception in Mandi, expresses love for Himachali culture  Also Read - Varun Dhawan-Natasha Dalal Wedding Guest List: Shah Rukh Khan, Salman Khan, Karan Johar To Be in Attendance

Salman Khan has been invited as a ‘state guest’ by the Himachal Pradesh government, as reported by IANS, as the state Rural Development Minister Anil Sharma is Aayush’s father  and former telecom minister Sukhram is his grandfather. Chief Minister Virbhadra Singh has been invited but will not attend the reception.

What will Salman Khan eat at Arpita Khan Sharma’s wedding reception in Mandi?

A traditional meal of Dham will reportedly be served to guests, with the non-veg main course having chaa ghosht (lamb cooked in yoghurt), and murgh anardana (chicken stewed in pomegranate paste). For the veg main course, there will be Himachali dal channa (split gram with fennel seeds) and mathri choware (lentil fritters in spinach gravy). Breads will include babroo, chawal ki kadak roti and beduan roti. Sweetened rice or meethe chawal with dry fruits and saffron will be served for dessert.

A wedding reception was also held in Mumbai soon after for the bride’s guests. And now, Salman is by his sister’s side in Mandi for another grand reception, after Arpita and Aayush are back from their honeymoon and settled in their married life.